Franklin Dam and the Greens

1982: Protests against Franklin Dam in Tasmania lead to formation of the Greens 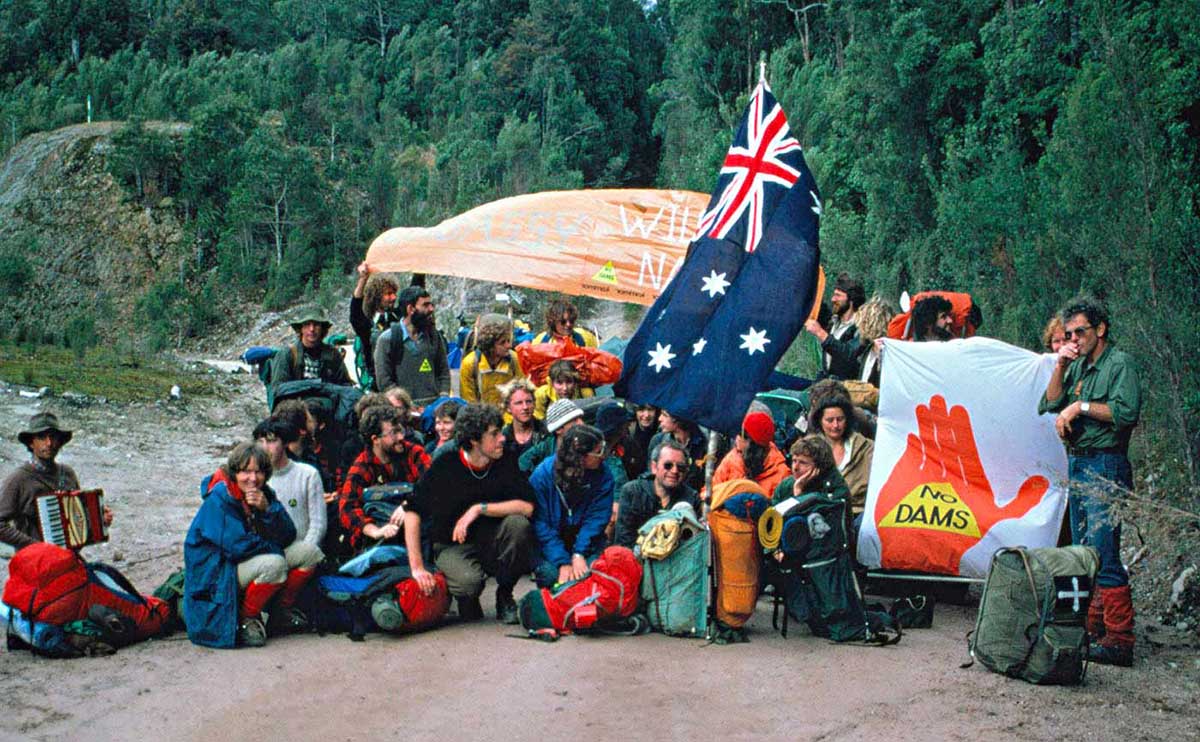 Protesters at the Franklin River

In 1982 protesters and environmental activists worked with the Australian Government to stop the damming of the Franklin River.

This action saved a key wilderness area in Tasmania and created a political precedent for the raising of environmental concerns in parliament.

The political success of the environmental groups involved ultimately led to the formation of The Greens, Australia’s third most popular political party behind the Liberal-National Coalition and the Labor Party.

Bob Brown, in his foreword to Alice Hungerford's UpRiver:

All up, some 6000 people registered to help, nearly 1500 protectors of the wilderness were arrested and 600 went in paddy wagons across the island, overnight, to Risdon Prison. 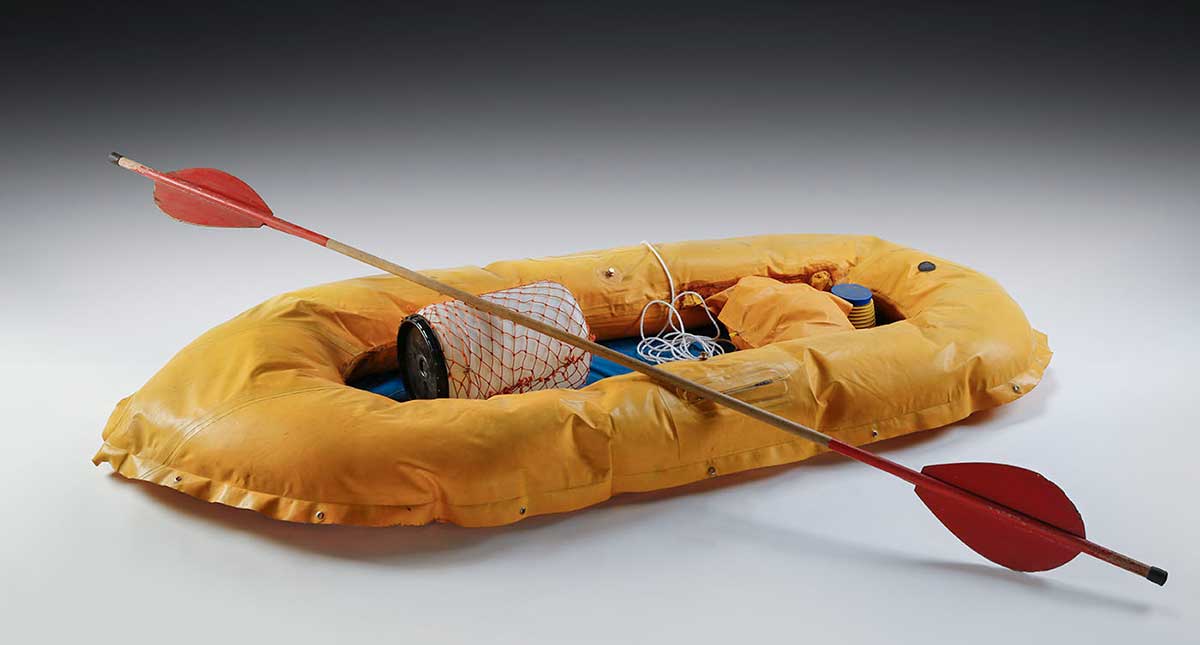 Inflatable raft used by protesters during the Franklin Dam protests

In 1972 the Tasmanian Government gave the Hydro-Electric Commission (HEC) of Tasmania permission to build dams on both the Serpentine and Huon rivers. The damming of these rivers flooded the natural basin of Lake Pedder and led to extensive environmental damage and habitat loss leading to the extinction of at least two invertebrate animal species.

Widespread opposition to the Lake Pedder project started in 1967 when the Tasmanian Government removed the protected status of Lake Pedder National Park to allow construction of the dam.

Environmental groups – including the United Tasmania Group, the world’s first green party – protested and lobbied politicians in an attempt to stop the dams being built, while the Prime Minister, Gough Whitlam, offered the Tasmanian Government money to save the area. His offer was refused.

In 1976 when the reservoir was flooded and the Lake Pedder battle lost, activists resolved to be more vigorous in their opposition to environmental damage in Tasmania.

It was from this commitment to action that the Tasmanian Wilderness Society was formed at the house of Dr Bob Brown in 1976.

The society campaigned against a range of environmental issues in the state, including deforestation, mining and road building in wilderness areas. It also maintained a watch over HEC plans for future dams.

In 1978 the HEC once again proposed a new dam, with the intention of luring more industry to the state through the provision of cheaper electricity. Initial plans proposed a dam to be built on the Gordon River near its confluence with the Franklin, thereby flooding the Franklin and destroying a large wilderness area.

Following the Lake Pedder controversy, the issue was at the forefront of Australian environmental debate. Conservation groups including the Wilderness Society put intense pressure on the state government to protect the rivers and surrounding area. In 1980 about 10,000 people marched the streets of Hobart protesting against the proposed dam.

A sympathetic state Labor government led by Premier Doug Lowe added the Franklin River to the Wild Rivers National Park, essentially protecting it from damming by the HEC. Lowe also proposed a compromise, suggesting a dam be built on the Gordon River above its confluence with the Olga River.

This solution was unacceptable to conservationists (who maintained there should be no dams at all because of their ecological impact) and those who supported the dam (who wanted to proceed with the original proposal).

Environmental groups highlighted the potential destruction of habitat for endangered species and the certain loss of important Aboriginal rock art only discovered in 1981. The HEC defended the project by saying that 10,000 potential jobs would be lost in Tasmania if the dam wasn’t built.

While the Labor Party held Tasmania’s lower house, a conservative Legislative Council blocked Lowe’s compromise and caused a constitutional crisis. Needing a way to break the deadlock, Lowe held a referendum in December 1981 to ask the Tasmanian people to vote for their preferred dam option.

However, there was not an option to vote for no dams in Tasmania at all, which outraged environmental groups. Subsequently, these groups encouraged people to vote informally and to write ‘no dams’ on their ballot papers.

While the referendum had the desired outcome for pro-dam supporters, the crisis led to a no-confidence vote in parliament and the replacement of Lowe as Labor leader by Harry Holgate, who was pro-dam. In response, Lowe and Mary Willey resigned from the party causing Labor to lose their majority, resulting in the calling of a state election.

In early 1982 the pro-dam Liberal Party won the election and Robin Gray became the new Tasmanian Premier. He immediately passed legislation to go ahead with the original dam proposal – Franklin below Gordon.

Despite an outcry from environmental groups, the federal government was reluctant to become involved in the dispute.

Support for the ‘no dams’ campaign exploded across the country in 1982. Protest action spread to mainland states, and Bob Brown and other members of the Wilderness Society travelled the country to raise awareness.

Volunteers from the society were encouraging people Australia-wide to make the Franklin Dam issue a federal concern when voting in federal elections. Many people across Australia wrote ‘no dams’ on their federal ballot papers that year.

Using every means at their disposal, conservationists lobbied both influential figures and the public to become more involved in the fight against the Franklin Dam and, on 14 December 1982, action against the dam moved into a new phase.

Led by Bob Brown and members of the Wilderness Society, a blockade of the Franklin began at Warner’s Landing, drawing about 2500 people between December 1982 and March 1983.

As the federal government still refused to intervene in a state government matter, the blockade was designed to disrupt clearing and building works. Violent conflicts occurred between dam supporters, construction workers and the protesters.

During the blockade, about 1400 people were arrested and jailed, including members of the federal and state parliaments as well as Bob Brown.

The conservation movement gained a victory when the member of the Tasmanian House of Assembly in the seat of Denison, Norm Sanders, resigned to stand for the Australian Senate. In a count back of votes for his seat, Bob Brown was elected to replace him.

In February 1983 Prime Minister Malcolm Fraser announced an election, and on the same day, Bob Hawke became the leader of the Labor opposition.

Hawke publicly stood against the Franklin Dam proposal and agreed to stop it being built if elected.

Swinging into action, the Wilderness Society and other conservation groups helped the ALP lobby for votes in the election on 5 March 1983, resulting in Labor wins in a number of marginal seats and contributing to the election of the Hawke government.

The Liberal Party, however, continued to hold power in Tasmania.

Despite this, the Tasmanian Government continued working to dam the Franklin, insisting that the federal government had no right to involve itself in matters of state business.

In May 1983 the federal government took the Tasmanian Government to the High Court to force them to stop work, arguing successfully that federal laws were to be sustained in state contexts when they were upholding the UNESCO Convention for the Protection of the World Cultural and Natural Heritage.

The Tasmanian Government was forced to abandon the Franklin Dam project.

There had been an environmentalist political presence in Tasmania with the United Tasmania Group since 1972 but the Franklin Dam action led to a greater awareness of environmental issues. It also highlighted the need for a stronger environmental voice in Australia’s parliaments.

In 1983 the Sydney Greens became the first nationally registered environmentally-conscious party. By the late 1980s most states had formed ‘green’ parties, which campaigned on a platform of ecological issues and social justice.

In 1992 the New South Wales, Tasmanian and Queensland Greens parties agreed to form a national Greens Party, led unofficially by Bob Brown until 2005 when the party formally elected him their leader.

The Greens in Australia have grown from separate state parties to the third most popular national party after the Liberal-National Coalition and the Labor Party.

NO DAMSA yellow triangular sticker with the text "NO DAMS IN S-W TASMANIA WORLD HERITAGE" printed on it in black.