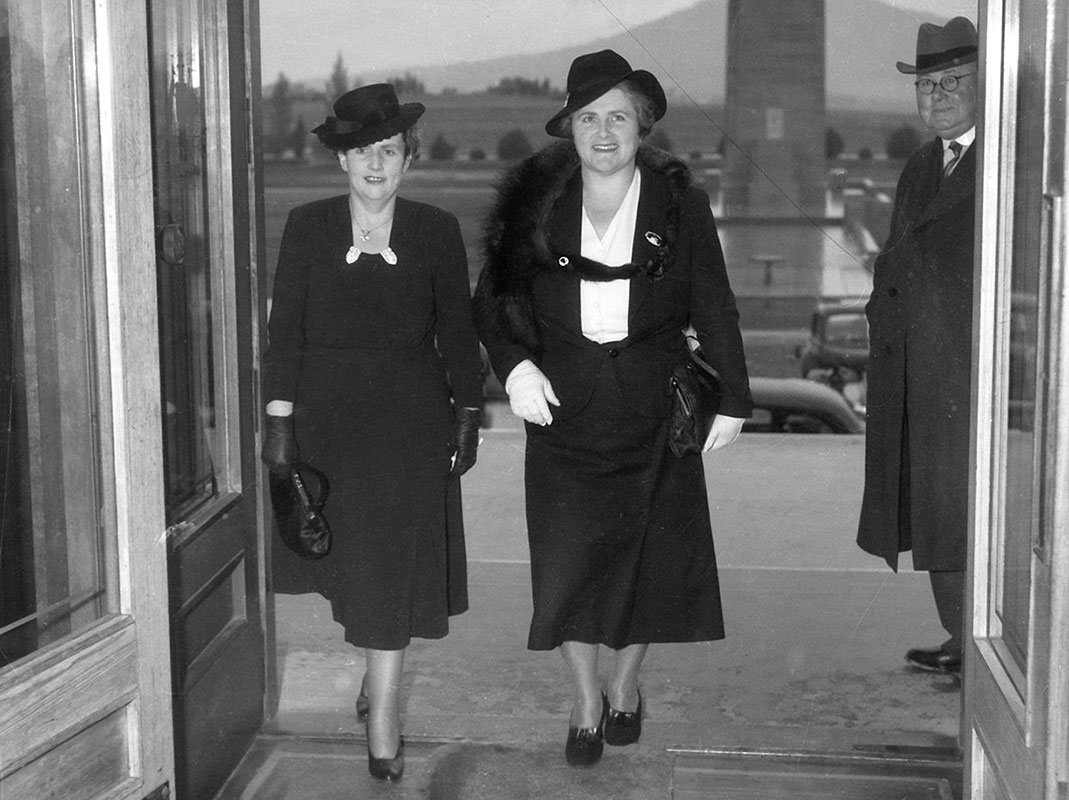 In 1902 Australia became the first nation to introduce equal federal suffrage. The enactment of the Commonwealth Franchise Act in that year allowed women to both vote and stand for election.

However, despite this ground-breaking legislation, it took another 41 years for the first women to be elected to the Australian Parliament.

In 1943 Enid Lyons became the Member for Darwin (in Tasmania) in the House of Representatives, and Dorothy Tangney was elected to represent Western Australia in the Senate.

Mr Speaker. It would be strange indeed were I not tonight deeply conscious of the fact, and not a little awed by the knowledge, that on my shoulders rests a great weight of responsibility. Because this is the first occasion upon which a woman has addressed this house. For that reason, it is an occasion which, for every woman in the Commonwealth, marks in some degree a turning point in history.

I also realise my great honour in being the first woman to be elected to the Senate. But it is not as a woman that I have been elected to this chamber. It is as a citizen of the Commonwealth, and I take my place here with the full privileges and rights of all honourable Senators, and what is still more important, with the full responsibilities that such a high office entails.

Women and the vote

In 1894 South Australia became the first polity in the world to grant equal political rights to both men and women, not only allowing them to vote but also to stand for parliament. In addition, all Australian states had given women the vote by the comparatively early date of 1908.

In 1902 the recently federated Australian nation enacted the Commonwealth Franchise Act, granting women the right to vote and run for federal parliament. The Act, however, excluded Indigenous Australians of either gender, who did not gain the right to vote federally until 1962.

Despite the legislation, it was 40 years between the first attempt by women to run for the Australian Parliament in 1903 and the swearing in of the first elected female representatives in 1943. This time lag – between women gaining political rights and actually being elected – is one of the longest in the world.

Prior to the Second World War, none of Australia’s major political parties had supported female candidates for election to federal parliament. Women had run independently or through minor parties, however none had received sufficient votes to win.

In 1943 this changed. Enid Lyons and Dorothy Tangney were elected to the House of Representatives and the Senate respectively, with Lyons endorsed by the United Australia Party and Tangney by the Australian Labor Party.

Lyons’s electoral victory highlighted the political credibility and profile she had gained while campaigning and working with her late husband, former prime minister Joseph Lyons.

She was an ardent public speaker, widely contributing to political debate even before her election, and in 1937 she was appointed Dame Grand Cross of the Order of the British Empire for her work.

Despite being well known for her political dedication and work towards social improvement, Tangney was elected only after she was asked to fill a casual Senate vacancy. She had twice unsuccessfully contested the Western Australian Legislative Assembly seat of Nedlands and was also unsuccessful in her first bid for the Senate.

While women held the right to run for the parliament from 1902, it was clear, even in the most basic functioning of Parliament House, that the groundbreaking election of Lyons and Tangney in 1943 had not been anticipated.

There was a distinct lack of facilities for women parliamentarians, including the omission of designated female Member bathrooms when the House was built in 1927.

Mother to 11 surviving children, Dame Enid was actively involved in the political sphere, not only contributing to her husband’s career but also building a personal reputation for political knowledge and skill.

After the death of Joseph, Dame Enid used politics as a way to combat her depression.

Dame Enid was an extremely popular MP, winning her seat with an increasing majority at each election during her eight-year career from 1943 to 1951.

Focusing on a wide variety of issues and refusing to be limited to standing only on women’s matters, she did however use her platform to improve the situation for women by highlighting the need for family benefits, community housing, maternity services, child endowments and the free distribution of essential medicines.

Dame Enid was the first female Cabinet member, holding the office of Vice President of the Executive Council (a position she described as ‘toothless’) from 1949 until her retirement from parliament due to ill health in 1951.

Despite her retirement, Dame Enid remained extremely active in public life. She held a number of positions including commissioner of the ABC, honorary fellow of the Australian College of Nursing and founding vice-president of the Australian Elizabethan Theatre Trust.

She also authored three memoirs and, between 1951 and 1954, a twice-weekly press column. After her death in 1981, a state funeral was held for Dame Enid and she was buried next to her husband.

Dorothy Tangney was elected Senator for Western Australia in 1943 and served for 25 years. Her record as the longest serving woman in parliament wasn’t broken until 2001.

Widely respected both in parliament and by the public, Tangney was known for her strong social conscience and committed work for social reform.

During her time in politics, Dame Dorothy took a stand for many women’s issues but was openly opposed to some of the more radical women’s rights groups.

She promoted equal pay and opportunity, endowments for abandoned women and war widows, education for all, medical pensions and benefits for disabled Australians as well as free tertiary education (being a foundation member of the council of the Australian National University).

Tangney was the first woman to attend an Empire Parliamentary Association conference, held in London in 1948. She was also the first woman to preside over the Senate (intermittently during the 1960s) as temporary Chair of Committees.

Dame Dorothy proved a popular politician both with branch members and the public, only losing her seat in 1968 when nominations were turned over to the State Executive of the Labor Party, who dropped her to the difficult third spot on the ballot ticket.

After her loss, Tangney became the first woman born in Western Australia to be appointed Dame Commander of the Order of the British Empire for services to the Australian Parliament.

Ongoing impact of women in parliament

Despite the early lack of political party support and negative coverage of female candidates in the daily press, reservations about women in politics started changing with the swearing in of Lyons and Tangney. Both women were widely respected parliamentarians and a popular public choice of representative.

Adding a woman’s voice to parliament, Lyons and Tangney used their positions not only to highlight women’s issues but also to pave the way for further female involvement in Australian politics.

Women have since held the highest offices in the nation, with the then Governor-General, Quentin Bryce, swearing in Julia Gillard as the first female Prime Minister in 2010.

However, there is still a way to go towards equal representation. In 2014 women made up 26.7 per cent of the House of Representatives and 38.2 per cent of the Senate. In 2022 the proportion of women in the Australian parliament as a whole rose to 39 per cent.

Face powder compact presented to Dame Enid LyonsThis face powder compact belonged to Dame Enid Lyons, who became the first woman elected to the Australian House of Representatives when she won the Tasmanian seat of Darwin in 1943. In 1949 she became the first woman to serve in the federal Cabinet. Before running for Parliament, Enid Lyons was well-known throughout Australi...
On display

Trends in the gender composition of the Australian parliament, 2022, Australian Parliament House