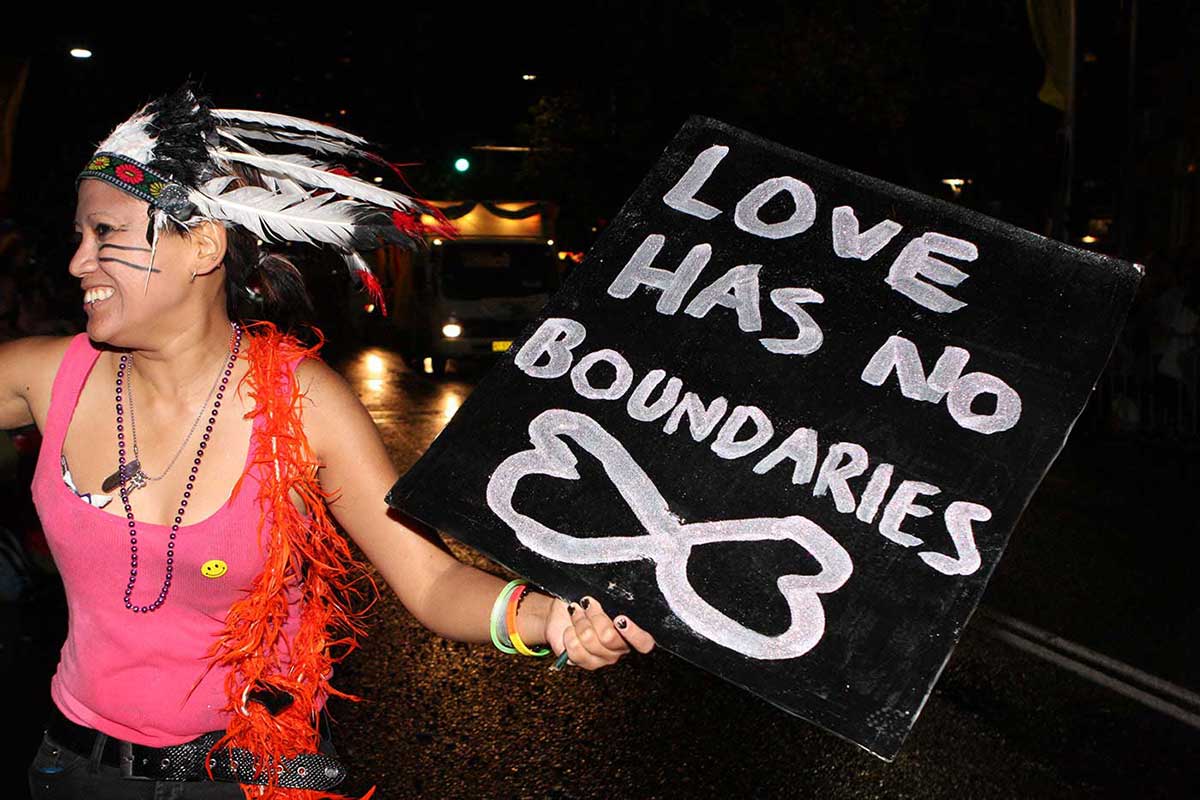 On 24 June 1978 a small group of gay and lesbian people operating as the Gay Solidarity Group staged a day of events in Sydney. The intention was to promote gay and lesbian culture and to encourage political activism against the discrimination they routinely experienced.

The group organised a traditional march and public meeting in the morning and a street parade at night. The violent police response to the parade brought national attention and helped to establish the parade as an annual event.

I’d gone along expecting a Mardi Gras and finished up in a humdinger of a riot in Kings Cross.

The Stonewall riots that began in the early hours of 28 June 1969 in New York City were the result of a police raid on a gay bar called the Stonewall Inn.

These riots are widely considered to mark the start of the international gay rights movement.

In March 1978 the San Francisco based Gay Freedom Day Committee contacted Australian activists calling for solidarity activities to support a march planned on the anniversary of the Stonewall riots.

The march was in opposition to the controversial Briggs Initiative which if passed would have mandated the firing of gay and lesbian teachers in California public schools.

Around Australia, various groups and organisations had been lobbying, staging demonstrations and marches, producing newsletters and a variety of other activities to promote their cause. Conservative social and church groups opposed their activities throughout the 1970s.

Australian Lesbian and Gay Archives president Graham Willett describes the 1978 Mardi Gras as the ‘most dramatic moment of the backlash’ against the campaign for gay rights. The parade started at 10pm and progressed down Oxford Street towards the city. The trouble began when they reached Hyde Park.

In an attempt to get the crowd to disperse, the police confiscated the lead truck and loud speaker. The crowd, seeing that access to Hyde Park was blocked, headed towards Kings Cross. The police moved in and arrested 53 people.

According to Willett, ‘Many of those arrested were badly beaten inside police cells and the Sydney Morning Herald sank to new editorial lows by publishing the complete list of names and occupations of those arrested’.

Supporters began a ‘drop the charges’ campaign, which initially generated more arrests. However, due to public uproar about the arrests as well as favourable media coverage, the first charges were dropped in October 1978, and all charges were dropped by the end of 1979. Additionally, laws around obtaining permits for street marches and parades were liberalised.

As such, the first Mardi Gras march was a major civil rights milestone beyond the gay community. About 3,000 people marched in an incident-free parade in 1979.

Capitalising on this and on the wellspring of support that had emerged, the gay community decided to keep going with the idea of a parade.

They continued to campaign on different aspects of discrimination against them, and this also began to translate into a cautious acceptance of gay people as customers and employees. Businesses catering to gay and lesbian people also became more open.

However, this was not uniformly welcomed by the gay community. For most of the early 1970s, radical gay activists had called for the end of capitalism as an oppressive social force. A gulf emerged between the older radicals and new, less revolutionary activists.

Mardi Gras faced its next challenge with the spread of AIDS. Public fear about AIDS was so great that organisers of the 1985 Mardi Gras were under intense pressure to cancel.

That pressure, combined with the shock of seeing friends, lovers and partners sicken and die, fostered a determination and resilience within the gay and lesbian community. Mardi Gras took on tremendous significance.

AIDS activist Bill Whittaker noted, that ‘many of us … know people who just wanted to live until one more Mardi Gras, it was so important in their lives. And they did, and still do’.2

Mardi Gras has grown to be one of the major events of the Sydney calendar. Today it is a festival held over several weeks, culminating in a parade that attracts more than 200,000 participants and spectators. The survival and success of Mardi Gras represents a remarkable and defining change in public attitudes.

History of the event, Sydney Gay and Lesbian Mardi Gras

Graham Willett, Living out Loud: A History of Gay and Lesbian Activism in Australia, Allen & Unwin, 2000