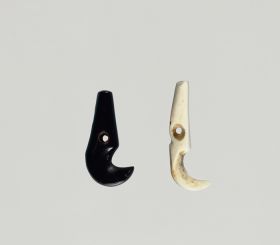 Humphrey No. 68: ‘One of the like kind of centre ornament as that in the next preceding Necklace made of white shell from ditto [Sandwich Isles].’ (= Oz 236)

Oz 236 is made of shell, Oz 235 of black coral. Both have a hole drilled through the middle. This was probably made to hold a cord of twisted human hair, in order to tie the object around the neck as with Oz 234.

Objects such as Oz 236 and Oz 235 are usually listed under the category of lei niho palaoa, even though they do not consist of whale teeth (niho = tooth, palaoa = whale). However, because they look very much like Oz 234 and were intended for the same use, the explanations made above may be considered as also valid for these. Cox (1967: 416) stated that ‘... of the thirteen pendants of the lei palaoa from Hawaiian archaeological material, not one is made from whale tooth. They are of coral, shell, pig tooth, and animal and whale bone. Among the 176 non-archaeological specimens in the Bishop Museum, still other substitute materials are found: wood, stone, calcite, tortoise shell... It is quite evident from this that to the Hawaiian the material from which the pendant was made was of secondary importance; his greatest concern was the form.’ Inken Köhler