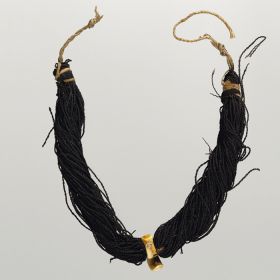 Humphrey No. 67: ‘A Necklace made of two small hanks of black twines united by the middels & between them a singular kind of ornament made of bone is placed, from Sandwich Isles.’

The breast ornament with hook is hung from two black bundles of twisted human hair, connected by a cord. A few strings are broken. The pendant is made of whale tooth and has the form of a hook, the tip being at the lower end. The hook’s tip is supposed to point forward when the ornament is worn. At the upper end of each bundle, there is a cord intended for tying the ornament around the neck.

‘The carved whale tooth, or niho palaoa, was a decoration worn by the high chiefs who alone were allowed to possess this ornament. ... In battle or on occasions of ceremony and display ... an alii wore his niho-palaoa... [It] was regarded as the exclusive property of the alii’ (Malo 1951:77). Mitchell (1982: 104) added that the lei niho palaoa was worn by ali’i men as well as women. This is also mentioned by Cook (quoted in Moschner 1955: 210 from the original publication of 1784): ‘Both sexes, nevertheless adorne themselves with necklaces made of bunches of small black cord, like our string, above a hundred fold... they fix a small bit of wood, stone or shell, about two inches long, with a broad hook, turning forward at its lower part, well polished.’ Cox (1967: 419) also commented on the special meaning of the lei niho palaoa and called it an ‘object of value’, the use of which had become established over many generations. He mentioned the story of ‘Umi, son of Liloa, in which the lei niho palaoa is the sign through which ‘Umi is recognised as Liloa’s rightful successor. Inken Köhler