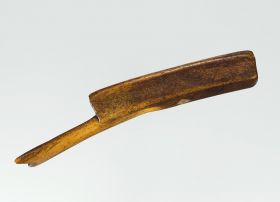 Humphrey No. 206: ‘an Instrument made of bone, the Shape in some respects like to the one described in the preceding article, but is furrowed only on one side & is used by the Natives of King George’s Sound in preparing the flax of which they make their Cloaks.’

The beater is made of a piece of whalebone, the head with a trapeze-shaped cross-section, and the grip projecting from its upper edge. The uppermost side is formed by the smooth outer side of the bone, while the lower side is porous with eleven parallel grooves on the beater head. The end of the flat grip is widened and notched, rather like a fish-tail. The piece has become smoothed and polished through long use and otherwise features a flattish cavity on the upper side to support the thumb.

Like the members of the third voyage, Humphrey made a thoroughly appropriate comparison with the tapa beaters of the Pacific, and wrote that the Nootka used these for preparing the flax for their cloaks.On the other hand, Captain King wrote more correctly that the Nootka used the beaters to process the bark of a conifer tree into a hemp-like consistency. However, the meagre descriptions from the third voyage would seem to indicate that this practice was never actually observed (Beaglehole 1967, Illa: 324; Illb: 1103, 1411). John Jewitt (1974: 51), who described this procedure, mentioned beaters made of wood as well as of bone. Drucker (1951: 94) mentioned only tools made of whalebone.

In addition to the Göttingen example, which Gunther (1972: 232) briefly mentioned under a false inventory number, there are eight other Nootka bark beaters which can be ascribed to the third voyage. One of these, in Vienna, has meanwhile been lost (Feest 1995: 157f.). One of the others in London and one in Berne feature comparable grips with notched ends. The second London piece and another in Edinburgh have a much deeper notch, while the grip of a further piece in Glasgow ends in a bulge. Two more bark beaters from the third voyage may be found in Wellington, New Zealand (Kaeppler 1978a: 263, Fig. 582-83; 1978b: 64, Fig. 122; Henking 1957: 369, Fig. 35; King 1981: 85, PI. 70). No less than seven of these Nootka textile tools were sold at auction by the Leverian Museum in 1806, including a beater which Sarah Stone had drawn (Force and Force 1968: 118). A further example from the eighteenth century is part of the Vancouver Collection of the British Museum (Gunther 1972: 232). Christian F. Feest

Gunther, Erna, Indian Life on the Northwest Coast of North America as seen by the Early Explorers and Fur Traders During the Last Decade of the Eighteenth Century, Chicago and London, 1972.

Back to Nootka
Back to Tools