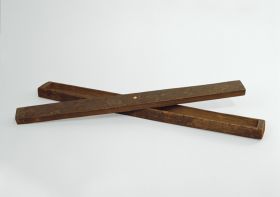 Humphrey No. 335: ‘a long box or arrow Case with a deep lid, from Unalaschka on the N. W Coast of America.’

Container and lid (with their own respective inventory numbers) were carved in a trough-like fashion from a piece of wood, with the narrow sides being thicker than the long sides. The lid fits exactly over the narrowed sides of the container, its lower edges flush with the base of the container. At the end of the long sides of the lid, there are three to six parallel grooves along the upper edge, at one end shorter and narrower, at the other end longer and wider. The outer sides of each part, which clearly show tool marks, have marked remains of a red-brown paint, as well as six black lines running diagonally over the upper and lower sides.

The provenance as given by Humphrey, ‘Unalaschka’, is definitely wrong, because wooden quivers were only found along the central North-west Coast among the Nootka and their neighbours. The Vienna Collection from the third voyage includes two further, similar arrow cases, which were already correctly described in the Leverian Museum as being from Nootka Sound. In contrast to the Göttingen case, the somewhat shorter Vienna examples are embellished with relief carvings and, in part, with inlays. However, they also exhibit remains of a red pigment and at least one of them features grooves, in this case however on the upper side (cf. Feest 1995; 152-56).

Samwell was the only member of the third voyage to describe the quivers in more detail: ‘They keep their Arrows in wooden Cases in general tho’ when they travel carry them in quivers made of the skins of wild Beasts’ (Beaglehole 1967, Illb: 1102). Drucker’s Nootka informants claimed that the opened cases were laid in front of the hunters in the boat, and that they were too awkward to be used by the hunters on foot. Instead, they would hold a few arrows in the hand (Drucker 1951: 32). John Webber’s picture of a man carrying a quiver made of hide, its form clearly showing that it held a wooden case (Joppien/Smith 1985-88, III/1: 93, PI. Ill; III/2: 453-55, 3.214-17), would appear to refute this claim. Mozino (1970: 16) mentioned only the corresponding sheath made of bearskin.

Boas (1909: 514f.), in describing similar quivers from the Kwakiutl, referred to one example in the American Museum of Natural History which was charred on the outside, but apparently wrapped up in several places with strips of cedar bark. The diagonal black lines on the Göttingen example may also be attributable to a wrapping material. Other unembellished arrow cases are to be found in the collection of the Royal British Columbia Provincial Museum. Christian F. Feest