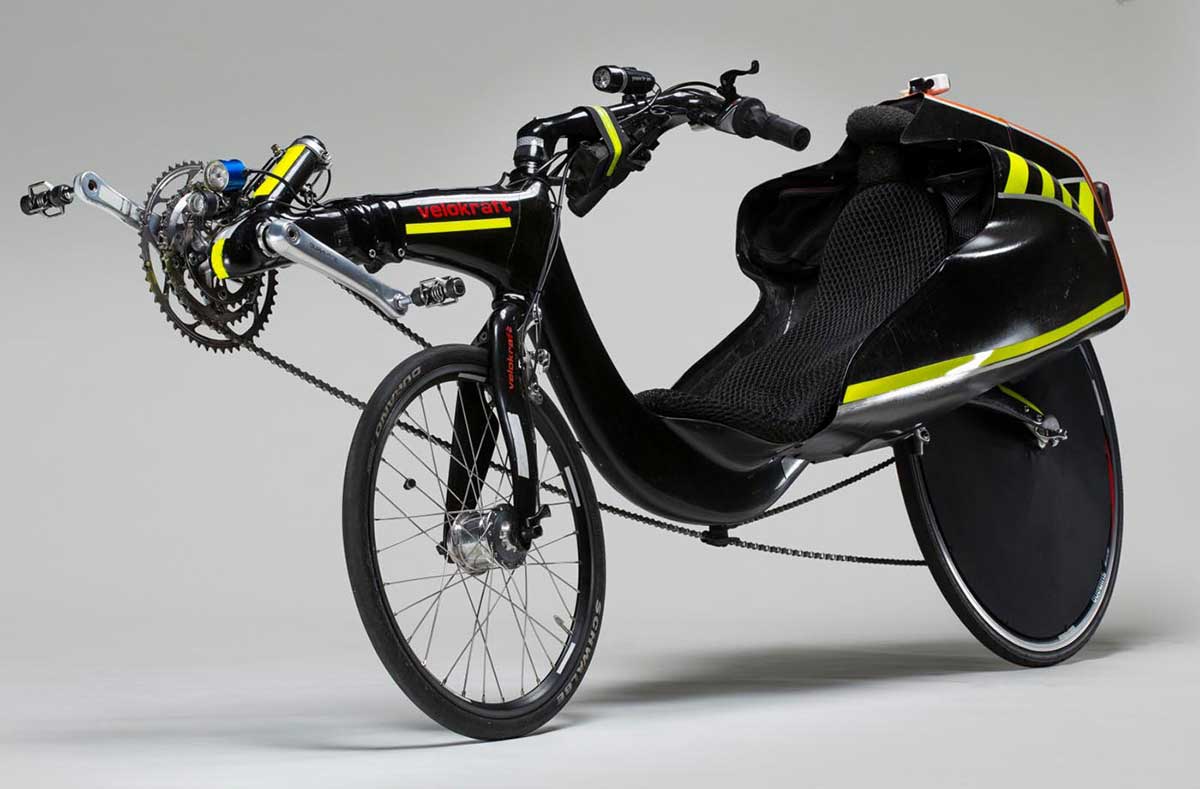 In 2009 Heal pedalled this bike from Fremantle to Sydney in 11 days, 17 hours and eight minutes, breaking the record for a solo and unsupported crossing of continent by more than two days.

The following year Heal covered around 15,000 kilometres on the same machine, cycling alone around Australia in 48 days, 23 hours and 37 minutes, again lowering the previous record by approximately two days.

Recumbent bicycles can be up to 30 per cent more efficient than an upright bicycle, with the horizontal position of the rider reducing wind resistance and making the bike more aerodynamically efficient.

The vastness of the Australian continent has posed an irresistible challenge to generations of explorers, adventurers and athletes.

When the first bicycles arrived in the colonies in the 1870s, cyclists soon looked to traverse great distances, first between the cities, then through the heart of the interior.

Roads and bicycles have improved since those times, yet the desire to move across the country by human power alone continues to captivate adventurous cyclists today.

Bicycles where the rider is in a laid-back or reclined position are called recumbents, or human-powered vehicles. Various designs exist with either two or three wheels.

Recumbents first became popular when cyclists began using them to break speed records in Europe in the 1920s. They were probably first used in Australia in the 1930s.

People who ride recumbents like them because they are comfortable and fast, and allow them to ride further than if they were riding a conventional, or upright, bicycle.

In 1934 the world cycling governing body for sports cycling, the UCI (or Union Cycliste Internationale), banned recumbents from all competitive racing due to their aerodynamic advantages. The ban is still in place today.

Nevertheless, outside UCI sanctioned competitions, recumbents hold every unpaced, human-powered distance and speed record in the world. A fully faired recumbent bicycle has been pedalled at over 133 km per hour on flat terrain in the United States of America.

In 2000 Eric Barone set a new land speed record for a bicycle – using a specially designed aerodynamic upright bike, helmet and clothing – to record a top speed of 222 km per hour, riding downhill on snow in the French Alps.

To qualify as a solo and unsupported record these journeys must follow an informally agreed upon route and pass through a number of towns identified as control points, where photographic evidence must be taken.

Pre-arranged support in the form picking up supplies at a friend’s home or shelter is permitted in just four locations. No pre-arranged guides or drafting (riding behind another vehicle) is allowed.

On both journeys Heal rode between 280 and 400 kilometres each day, staying in motels and roadhouses. Where no accommodation was available, he slept beside the road in a lightweight bivouac bag. For sustenance, he carried a musette bag packed with muesli bars, muffins, bananas and chocolate bars under his left arm that could be reached while cruising along.

Heal used a tracking device that sent a signal to a satellite which then relayed his position to a special webpage which showed his progress, where he stayed overnight, even where he paused for lunch. News soon spread and he attracted a dedicated following across the country.

Heal joins a long list of cyclists who have travelled great distances across Australia on human powered vehicles, yet he remains characteristically modest about his achievements. In Heal’s words:

Reflecting back on the journey [around Australia] now it all seems like somewhat of a dream. I can’t believe I was out there pedalling those distances for all those hours, every day. I never felt unsafe or threatened. I never felt I wouldn’t get to the end of the trip. It didn’t seem to be a super human effort – just an average bloke with a commitment to succeed and good planning.

VK2 Velokraft recumbent bicycle used by Peter HealThe recumbent used by Peter Heal to break the trans-Australia and around Australia cycling records in 2009 and 2010. In 2009 Heal pedaled this bike from Fremantle, Western Australia, to Sydney, New South Wales, in 11 days, 17 hours and eight minutes, breaking the record for a solo and unsupported crossing of continent by more th...