James Samuel Taylor (1888–1962) was a farrier who joined the 9th Australian Light Horse in 1914 and served in Egypt and Palestine.

Taylor was a crucial part of his mounted regiment. A skilled farrier, he was one of a small team that cared for the horses in his squadron. He was an able horseman and an effective soldier.

Taylor returned to Australia after the war. In 1921 he married Margaret Edith Dicker and the couple had three children.

Taylor died, aged 73, on 26 January in 1962 and was buried in the War Cemetery at Centennial Park, Pasadena in Adelaide.

The National Museum's collection includes Taylor's pay book and a Light Horse tunic purchased as a 'coming home' uniform. It reflects Taylor's war service, as well as his desire to present well on his return to Australia.

It is apparent that Taylor's uniform has a complex history. This is not the uniform of a man who had returned home from the war and hung it in his wardrobe. We know that the uniform belonged to Taylor as the tunic, kit bag, gaiters and pay book are labelled with his name or service number.

A closer examination of this uniform indicates that there have been some additions and changes that are not strictly 'correct' from a military perspective. We know that at least one militaria dealer and a military collector owned Taylor's uniform and in this latter period, parts have been added to the uniform in order to 'complete' it.

Taylor was born in 1888, probably in Williamstown, Victoria, not Streaky Bay, South Australia, as he claimed at enlistment. He was the eldest son and fourth child of James Samuel Taylor (senior) and Juliana Calnan. James and Juliana had 10 children, nine of whom survived to adulthood.

James Snr was a carpenter and in the late 1880s moved his young family to Williamstown, a key cargo port in Victoria. Perhaps prompted by the 1890s depression, the family had returned to South Australia by 1895. There Taylor served an apprenticeship with HA Hannay, a coachbuilder at Port Adelaide. 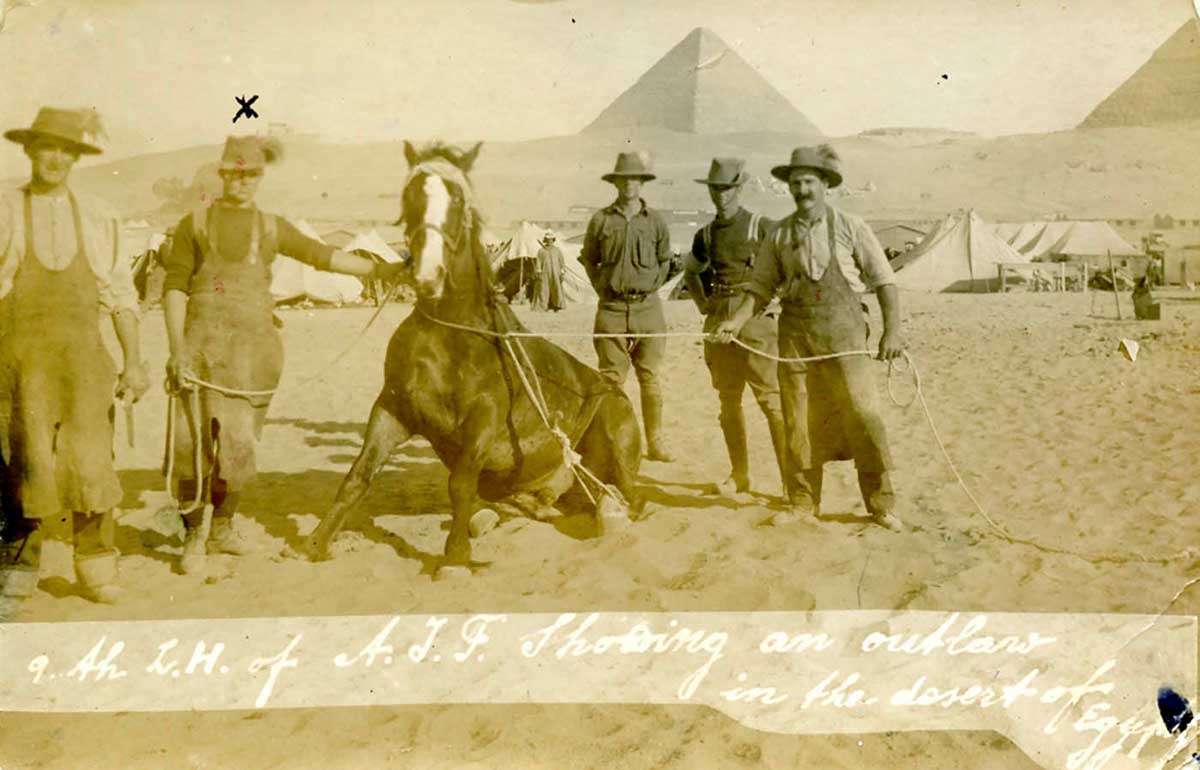 Farriers including Harold Mertin (marked with an 'x'), pictured ‘Shoeing an outlaw in the deserts of Egypt', about 1915

At the time of his enlistment in October 1914, Taylor was aged 26 and described his calling as a 'Shoeing & General Smith'.

He was appointed to the rank of 'Shoeing-smith' and attached to A Squadron of the 9th Light Horse.

Of the 539 people on the nominal roll for the first contingent of the 9th Light Horse, just 16 people (3 per cent) had a rank that was a horse trade of shoeing-smith, farrier or saddler.

In A Squadron three Shoeing-smiths and one Farrier Sergeant were appointed to care for the horses assigned to the 156 men in the squadron.

On the right arm of Taylor’s tunic is a horseshoe motif that indicates his role as a farrier during the war. While not standard issue, the horseshoe can also be seen on the uniform worn by Harold Mertin, who worked as a farrier alongside Taylor in A Squadron.

A Squadron boarded the transport Armadale at Melbourne on 12 February 1915 and disembarked in Egypt in March 1915. On embarkation, Taylor had been promoted to temporary Shoeing-smith Corporal.

In May 1915 the 9th Light Horse Regiment was deployed as an unmounted force to Gallipoli peninsula. As a shoeing smith, Taylor remained in Egypt to care for the regiment's horses.

We know from the experience of Harold Mertin, who served under Taylor, that this care included feeding, watering, exercising and shoeing the horses. On this occasion, Taylor's profession shielded him from the frontline and possibly saved his life.

An account in the Australian Light Horse Studies Centre's Desert Column notes that the '9th Light Horse Regiment participated in the ill-fated charge at Hill 60 on 27 August 1915 where most of the regiment was either killed or wounded.' Taylor's younger brother Frederick was killed in action at Gallipoli in May 1915.

As the battlefront moved to Palestine, the regiment took part in the First and Second battle of Gaza (in March and April 1917) and in the Battle of Beersheba (October 1917). In the back of his pay book Taylor kept a photograph that was annotated ‘Empty saddles after the battle of Gaza’.

It appears that Taylor suffered no serious injuries during the course of the war although he was in and out of hospital in the last 12 months.

In September 1918, when Taylor was on sick leave, the regiment participated in the Battle of Megiddo.

Taylor was one of many men in the regiment who were struck down by an epidemic of influenza in August and September that year. The war diary for the regiment noted that '[t]he health of the Regiment after the long period in the Jordan Valley was by no means good and men in debilitated condition were unable to resist this influenza infection'.

In April 1919 Taylor was evacuated to Australia suffering from deafness.

Soldiers' Pay Book of James TaylorA booklet with a woven pink soft cover, titled 'SOLDIERS' PAY BOOK / FOR USE ON / ACTIVE SERVICE.', which is stamped 'RECONCILED' and has 'CPL. TAYLOR.' handwritten on the front.
Facebook
Twitter
Pinterest
Messenger
Email