Judy Watson is the recipient of the 2015 Australia Council Visual Arts Award (artist). Her Aboriginal matrilineal family are from Waanyi country in north-west Queensland.

She co-represented Australia at the 1997 Venice Biennale, was awarded the Moët & Chandon Fellowship in 1995, the National Gallery of Victoria’s Clemenger Award in 2006 and, in the same year, the Works on Paper Award at the 23rd National Aboriginal and Torres Strait Islander Awards.

Her work is held in major Australian and international collections including: the National Gallery of Australia; all Australian state art galleries; the Taipei Fine Arts Museum; the St Louis Art Museum; The British Museum; the Museum of Archaeology and Anthropology, Cambridge University; The Library of Congress, Washington, DC; the Kluge-Ruhe Aboriginal Art Collection, University of Virginia; as well as important private collections.

Her works, living well, murri kitchen and fragments have been installed in the grounds of the Townsville Hospital, while NGARUNGA NANGAMA: calm water dream has been installed at 200 George Street, Sydney. It features engraving, pigment and light on sandstone that has been unearthed from the site.

Judy Watson: Blood Language, a monograph by Judy Watson and Louise Martin-Chew, was published by The Miegunyah Press, Melbourne University Publishing in 2009.

As an artist I seek to reveal layers beneath the ground, within objects, their history, their making and their taking, to ‘rattle the bones of the museum’, to wake the dead who are not dead but alive to all of us. 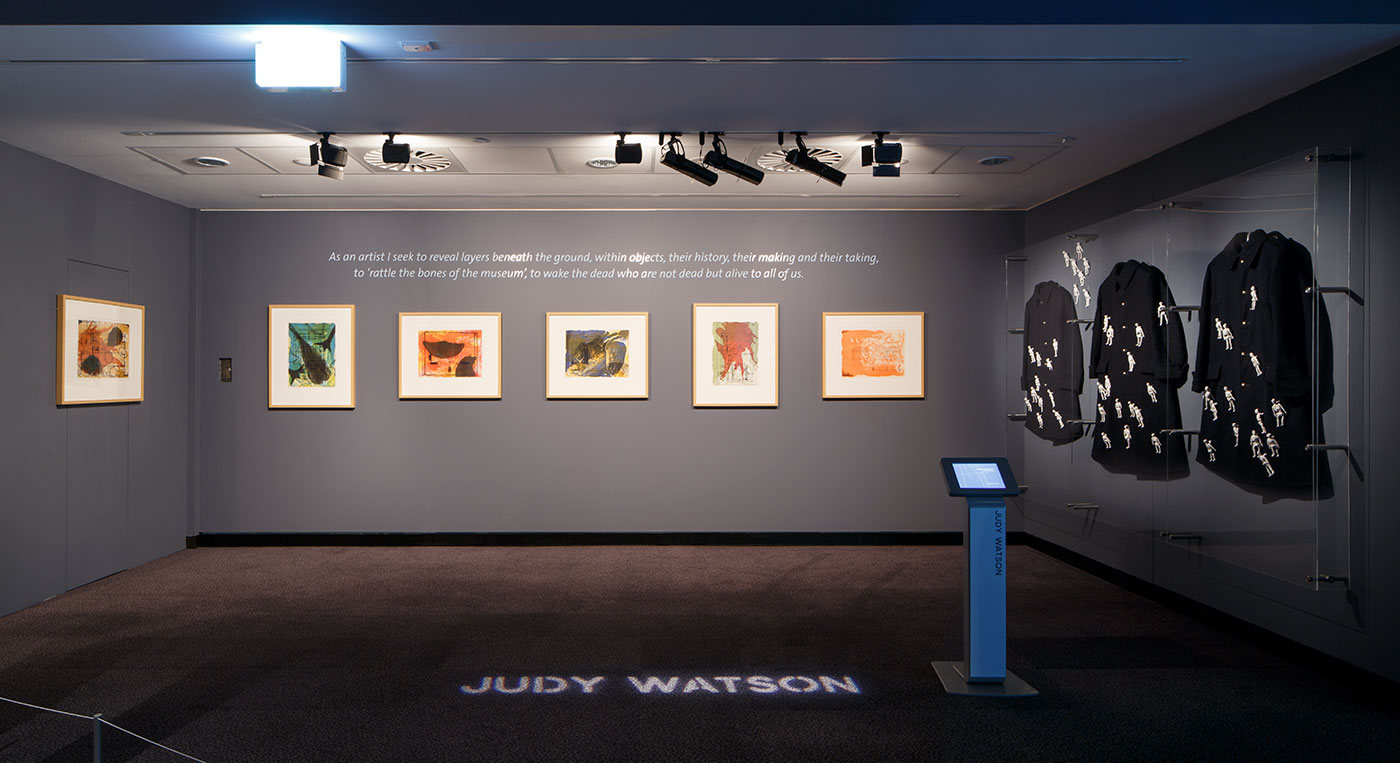 Watson says this of her work:

There should always be controversy in the air surrounding artists and makers, museums and objects and culture. It comes as a spark of energy, reverberating from the objects, which ricochets to the ceilings and the walls and the floors and between the other objects and the viewers in the space.

It is a necessary combustible reaction to what we see, what we know and don’t know, the power of the object and its impact upon us. The force, like osmosis, will slip under our skin, seep into our bones and electrify our impulses so that we are tasting culture on our tongue.

It is this that keeps museums alive and relevant, part of an ongoing dialogue and questioning as the past and the present collide and coalesce.

our skeletons in your closets

In this case, the skeletons refer to those small toy skeletons attached to the cloak of the Aboriginal protester AM Fernando as he toured Europe speaking of atrocities being committed against his people back in Australia.

the holes in the land series

In this series of works Watson considers the lives of Aboriginal objects in museums. She produced the 6 prints in early 2015 after viewing artefacts in the British Museum acquired from Brisbane as well as near her Aboriginal family’s country in north-west Queensland.

In these works she transposes object images onto plans and drawings of the British Museum. She considers the imagined, hollowed-out indentations as shadows, left in the ground, where objects have been removed. They are still resonating with the life force and essence of the objects, now displaced from their communities, housed in overseas museums, waiting for descendants of their people to return and hold them close once more.

For instance, the holes in the land 3, depicts a 1786 plan of the second floor of the British Museum overlaid with images of two pituri bags from the Gregory River region, Queensland, donated to the museum. Says Watson:

The pituri bags remind me of the Aboriginal trade routes that extend through Queensland and down into southern Australia. Some of my family were drovers or married into people from this area where the pituri came from. Pituri, or native tobacco, was a rich resource that everybody wanted. It was traded along with ochre, stone tools, pearl and baler shells across Australia.

The trade routes, connected by water holes became the droving tracks or, in some places, major arterial roads. The bags made from woven human hair and government-issue blankets are amazing objects, full of this rich sought-after resource that still holds the strong smell of the narcotic pituri within them.

Meanwhile, the holes in the land 4 features a general plan of the ground floor of the British Museum showing proposed extensions overlaid with images of possum-hair string aprons worn by women from the Mara people, McArthur River, Northern Territory. The aprons were donated by Professor Baldwin Spencer and J Gillen in 1903.

I am drawn to objects that contain hair because these are full of resonance and power. I wonder if some of my matrilineal ancestors’ hair might be in such objects. The old people in our area said they could tell where you came from by touching your hair. These hair-string skirts veil and conceal, their tentacle shapes are alive and moving.