The exhibition featured Exekias’s amphora showing the Greek warrior Achilles slaying the Amazon Queen Penthesileia and the marble relief known as the Apotheosis of Homer, by Archelaos of Priene.

Ancient Greeks: Athletes, Warriors and Heroes was on show at the National Museum of Australia from 17 December 2021 until 1 May 2022.

Listen to the audio tours

ABC broadcaster and proud Greek-Australian Patricia Karvelas on the most intriguing objects from the Ancient Greeks exhibition.

Learn about the Zantiotis family of Gunnedah and an important chapter of our cultural and culinary history.

Read about one of only three known traditional formal costumes from Castellorizo, Greece. 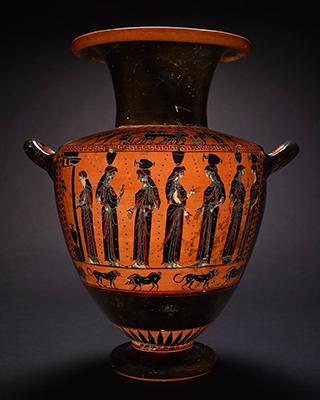 Ancient Greeks exhibition catalogue
Ancient Greek comic
A History of the World in 100 Objects from the British Museum
Rome: City and Empire
What’s on