This traditional Greek costume belonged to Rose Pappas and is one of only three known traditional formal costumes remaining from Castellorizo, Greece.

This garment was an important piece of Rose Pappas’s life growing up on the Greek island and was brought with her when she and her family migrated to Australia after the Second World War.

The Rose Pappas collection includes a traditional women’s formal garment from the Greek island of Castellorizo. It was made around 1920 for Rose Pappas, and worn by her for special occasions such as weddings, feast days, national holidays or religious celebrations.

Most women on Castellorizo had such garments, usually received when they came of a certain age and were thought to have reached womanhood. They were also worn during match-making processes and as bridal costumes.

The different components and layers of the garment made it adaptable to a number of different occasions, and different parts of the costume were worn depending on the importance of the event. The way the costume was worn could also indicate a woman’s age, wealth or marital status. 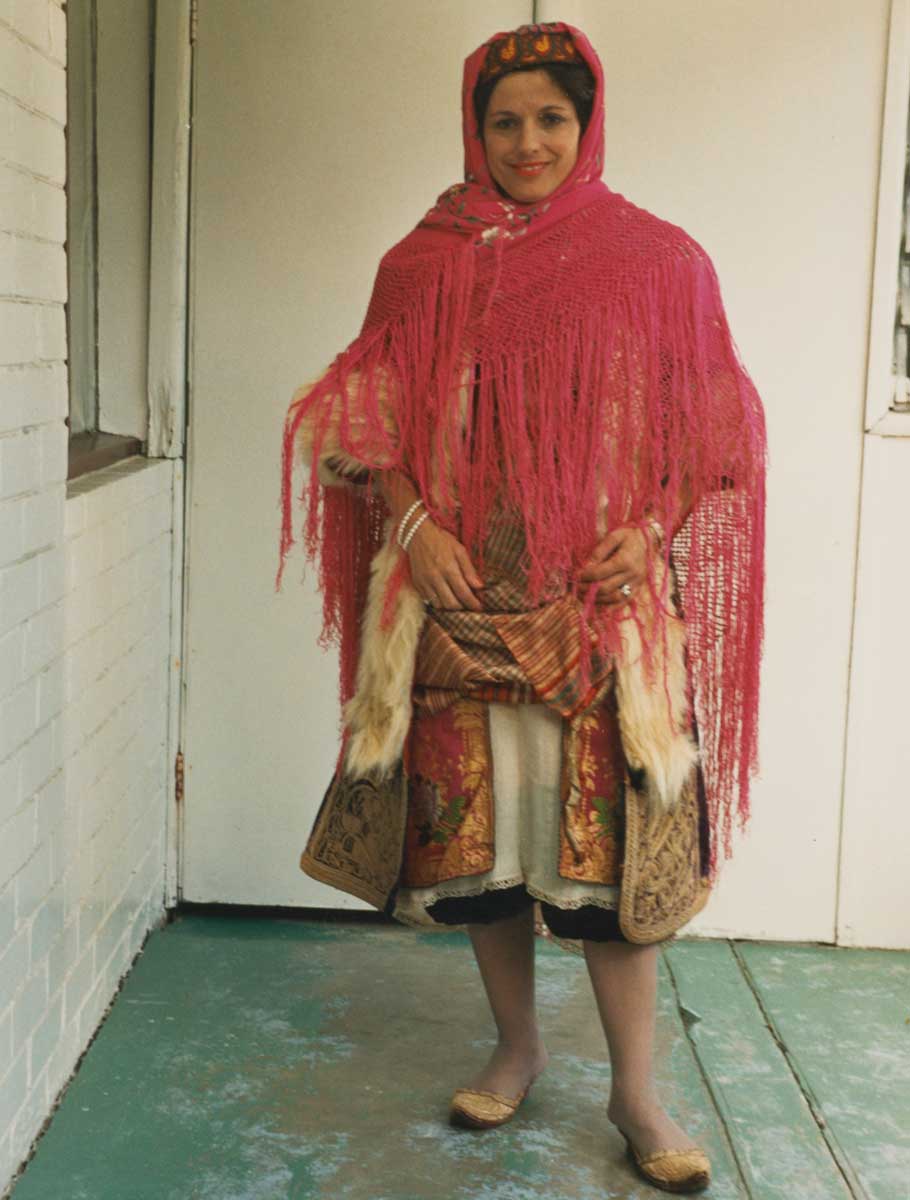 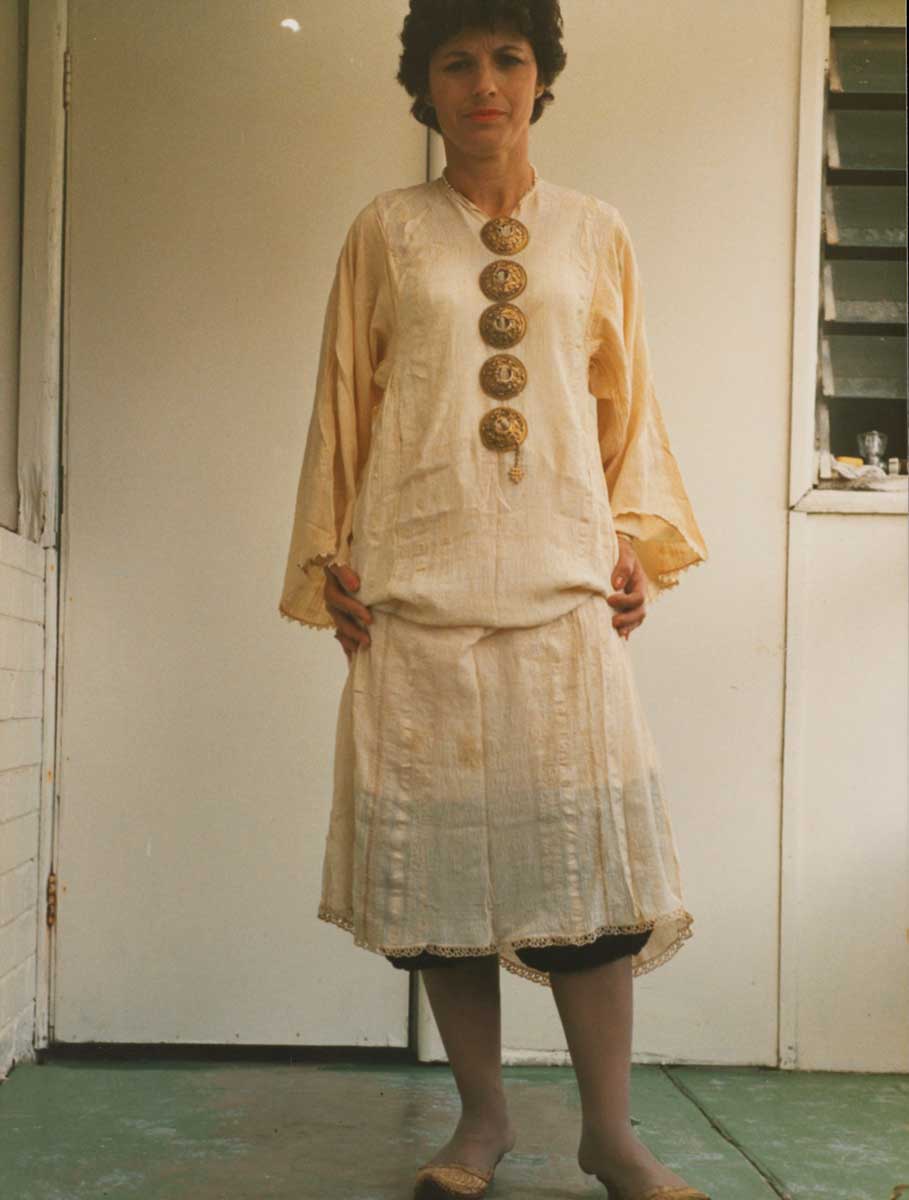 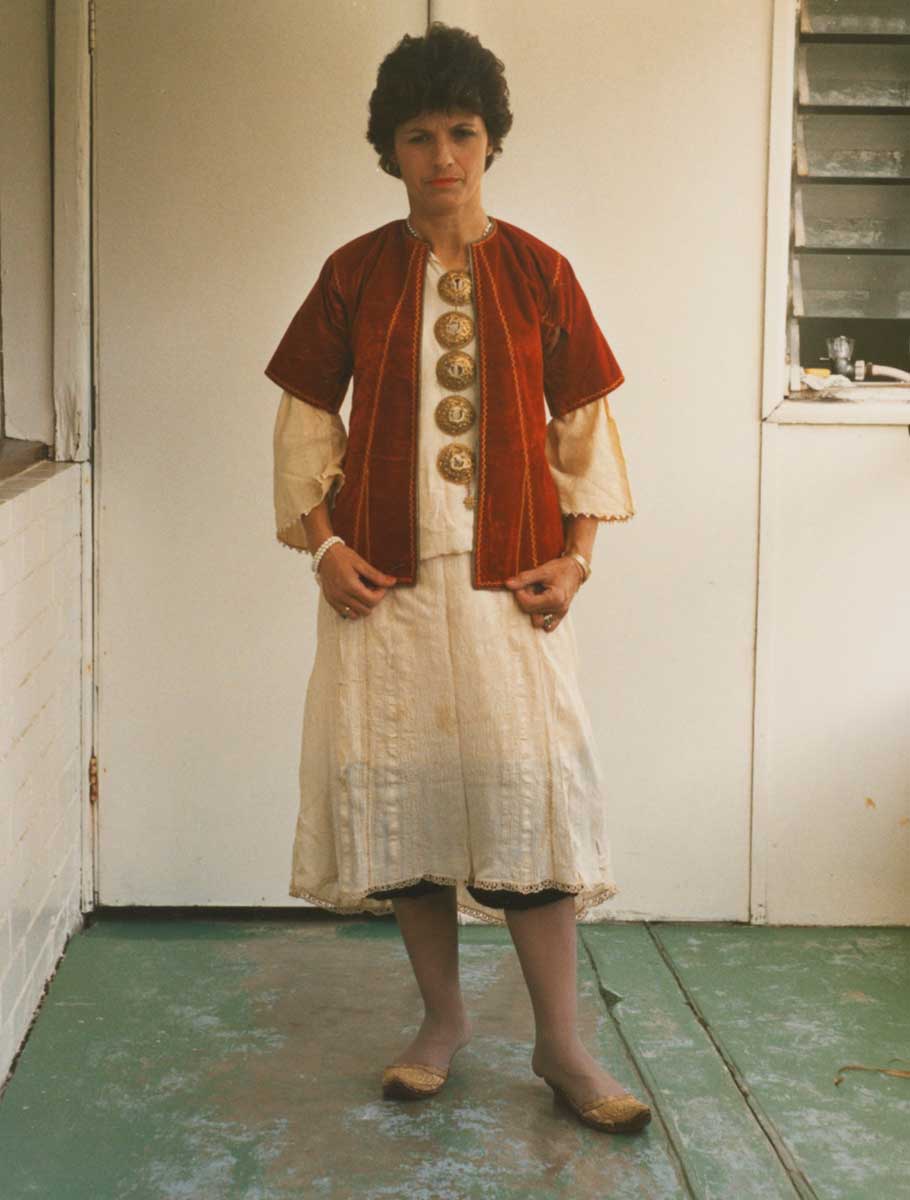 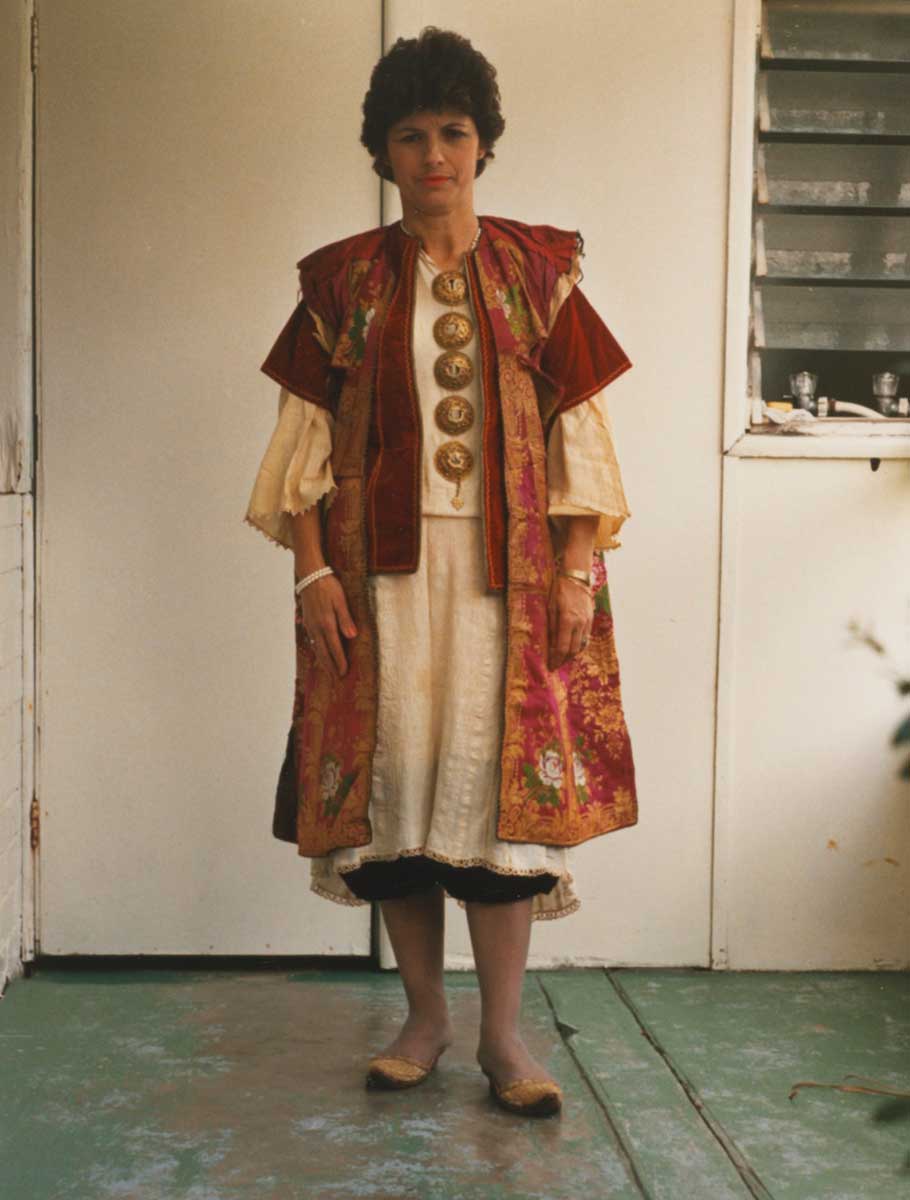 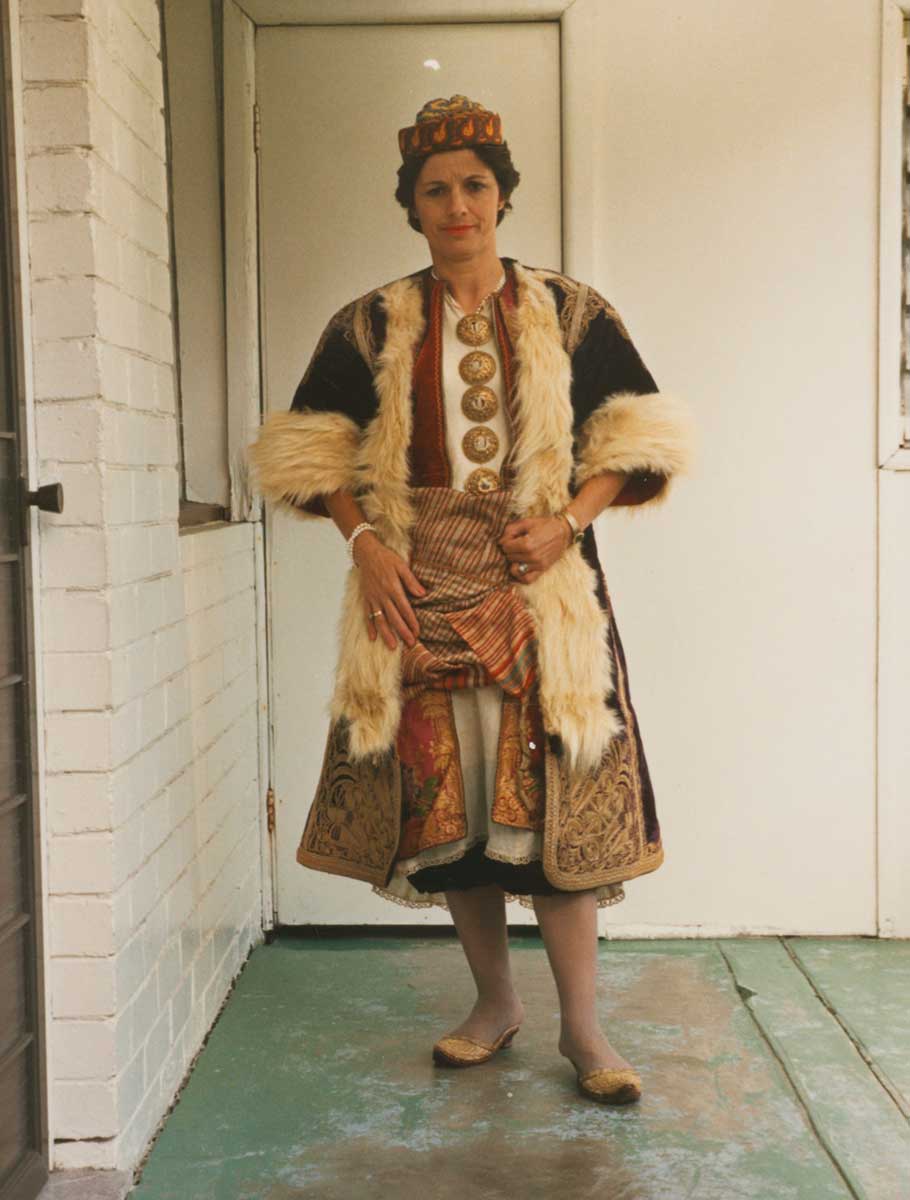 Wife of George Pappas, Rose Pappas’s eldest son, wearing the first layers of a traditional Castellorizian costume (chemise, pantaloons, button brooch and slippers), given to her by Rose Pappas.

Castellorizo – or Kastellorizo – is part of the Dodecanese islands in the eastern Mediterranean, 10 kilometres from the south coast of Turkey and 570 kilometres southeast of Athens. Although it is one of the smaller Greek islands with an area of roughly 10 square kilometres, the island once boasted a large merchant fleet and prosperous trade opportunities.

The island – also known under the name Megisti – is thought to have been occupied as early as the 9th century BCE. It was once home to over 10,000 people, but today has a population of approximately 500.

Castellorizo was occupied by the Ottoman Turks between 1512 and 1915. After a brief return to Greece, it was then occupied by the French and Italians until 1943. In 1943 Castellorizo was bombed by German forces, and its civilian population evacuated to refugee camps in Cyprus, including Rose Pappas and her family. This occurred swiftly and with little notice, and many families were forced to leave behind many of their possessions.

Castellorizo was bombed several more times after this, causing severe damage to much of the island and its residences. Many houses were also the targets of looting and arson by allied soldiers. In 1948 Castellorizo was finally reunited with Greece.

After four years as refugees in Cyprus, Rose’s eldest son, George, and two eldest daughters, Eva and Maria, migrated to Australia. Under the sponsorship of relatives who had migrated before the war, the siblings settled in Australia in 1947.

The rest of the family followed in 1949 and settled in Sydney, and this traditional garment was one of the few items Rose Pappas brought with her. As was tradition, she passed her Castellorizian costume to her eldest son’s wife.

The Castellorizo garment is said to be one of the most complete authentic garments from Castellorizo in existence since the evacuation of Castellorizo during the Second World War and the subsequent damage to the island. A similar garment is kept at the Benakis Museum in Athens and another is preserved at the Castellorizian Association of New South Wales in Kingsford.

The Pappas family were among thousands of Castellorizians who migrated to Australia after the Second World War, and among more than 160,000 migrants of Greek origin. Today it is estimated that more than 30,000 Australians are of either Castellorizian origin or parentage.

Greek migration to Australia began as early as the 19th century. The discovery of gold and subsequent gold rushes in the 1850s saw large numbers of Greek people among the many who migrated to Australia.

The 1901 Immigration Restriction Act (the formal establishment of the White Australia Policy) greatly limited non-British migration to Australia. In 1947 those born outside of Australia, Ireland or the United Kingdom made up a mere 2.7 per cent of the population.

By the late 1940s it became clear that these migration limits were having negative effects on Australia’s population growth. After the Second World War the immigration minister Arthur Calwell began to relax the policy to allow migrants and refugees from continental Europe. More than two million immigrants arrived in Australia between 1945 and 1965. 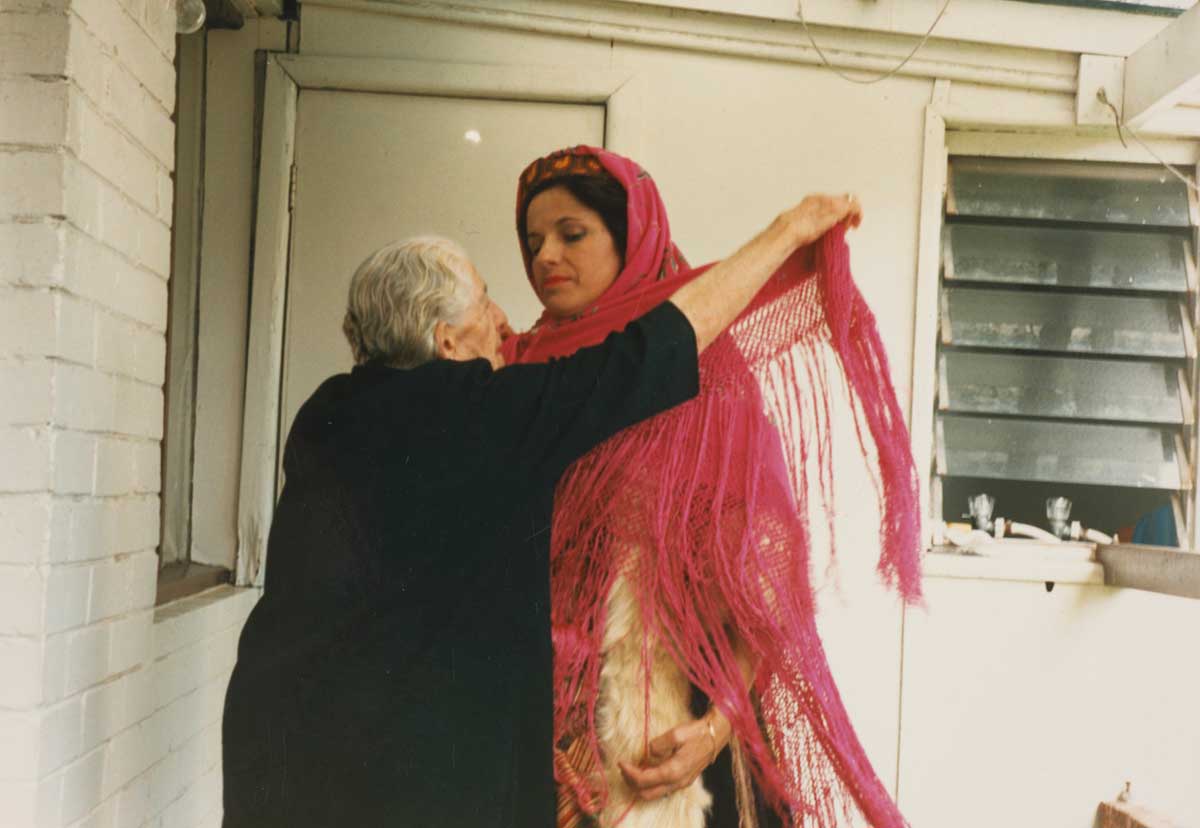 Rose Pappas with her daughter-in-law

After settling in Sydney, Rose Pappas cherished her Castellorizian heritage and maintained her traditions and customs. This traditional Castellorizian garment was kindly donated by the family of Rose Pappas to the National Museum of Australia in 1988.

Crimson full-length tunic, part of Castellorizian formal attire worn by Rose PappasGreek crimson full-length tunic with a rounded plain neckline and two side splits. It is fully lined with highly decorative damask weave fabric at the front opening and around the hem. It has orange silk to the main body. The main fabric is of highly decorative damask weave (composite). Decorated with black and gold braid, embro...