Ancient Greeks: Athletes, Warriors and Heroes is a major exhibition from the British Museum which has inspired this Fun at home activity.

This bell krater is from Ancient Greece. It’s called a bell krater because if you turn it upside down, the shape looks like a bell! It is a wide, deep vessel like a bucket, used for mixing liquids like wine and water to make drinks.

The artwork on the bell krater shows a youth jumping off his horse in front of Nike, the Goddess of Victory. (We bet you’ve heard of her!)

Look at how this artwork tell a visual story, like a modern-day comic.

Think about a story you would like to tell to create your own Ancient Greece-inspired comic.

How to make your own comic, inspired by the art of Ancient Greece

Note: there are a lot of steps. Don’t be overwhelmed as we have helped you break down the process and at the end you will have your very own Ancient Greece-inspired comic.

Here we’re making a comic by drawing part of the Ancient Greek poem 'The Odyssey', which is attributed to the great Ancient Greek poet Homer. Homer became so famous that he was worshipped as a god (as shown on the Apotheosis Relief). But in our video, artist Naomi Zouwer has drawn some everyday activities.

'The Odyssey' is an epic poem about the Greek hero Odysseus, who was king of the island of Ithaca. Odysseus spent 10 years trying to get home after fighting in the Trojan Wars.

Have you heard of the Trojan Wars? That’s another great story… but back to Odysseus.

On his journey Odysseus faced many dangers and monsters. The gods sometimes helped him and sometimes made his journey more difficult.

'The Odyssey' in short

Odysseus and his sailors sailed to the island of Ithica. Polyphemus, a kyklops (a one-eyed giant) lived on the island in a cave. When Odysseus landed, they discovered the unattended cave full of food, such as cheese. They ate all the food and waited for the kyklops return hoping he would be friendly.

Polyphemus (the kyklops) returns to the cave with his flock of sheep and moves a huge rock over the entrance blocking any escape. Upon finding the men in the cave Polyphemus becomes angry and begins to eat some of the sailors.

Odysseus comes up with a plan to save his remaining sailors. He gives Polyphemus a drink to make him sleep. Then the sailors poke his eye with a sharp stick and blind him.

Waking in fury Polyphemus opens the cave to let his sheep out. Clever Odysseus tied himself and his men to the underside of the sheep, thereby escaping.

Once safely back on their ship Odysseus calls out to Polyphemus, who throws large rocks at them. He misses but creates big waves that drive the ship out to sea.

Gather your materials. What will you draw on? Find a blank book or make your own. Artist Naomi shows how to lay out your pictures on a piece of paper to make a small six- to eight-page comic book called a zine. 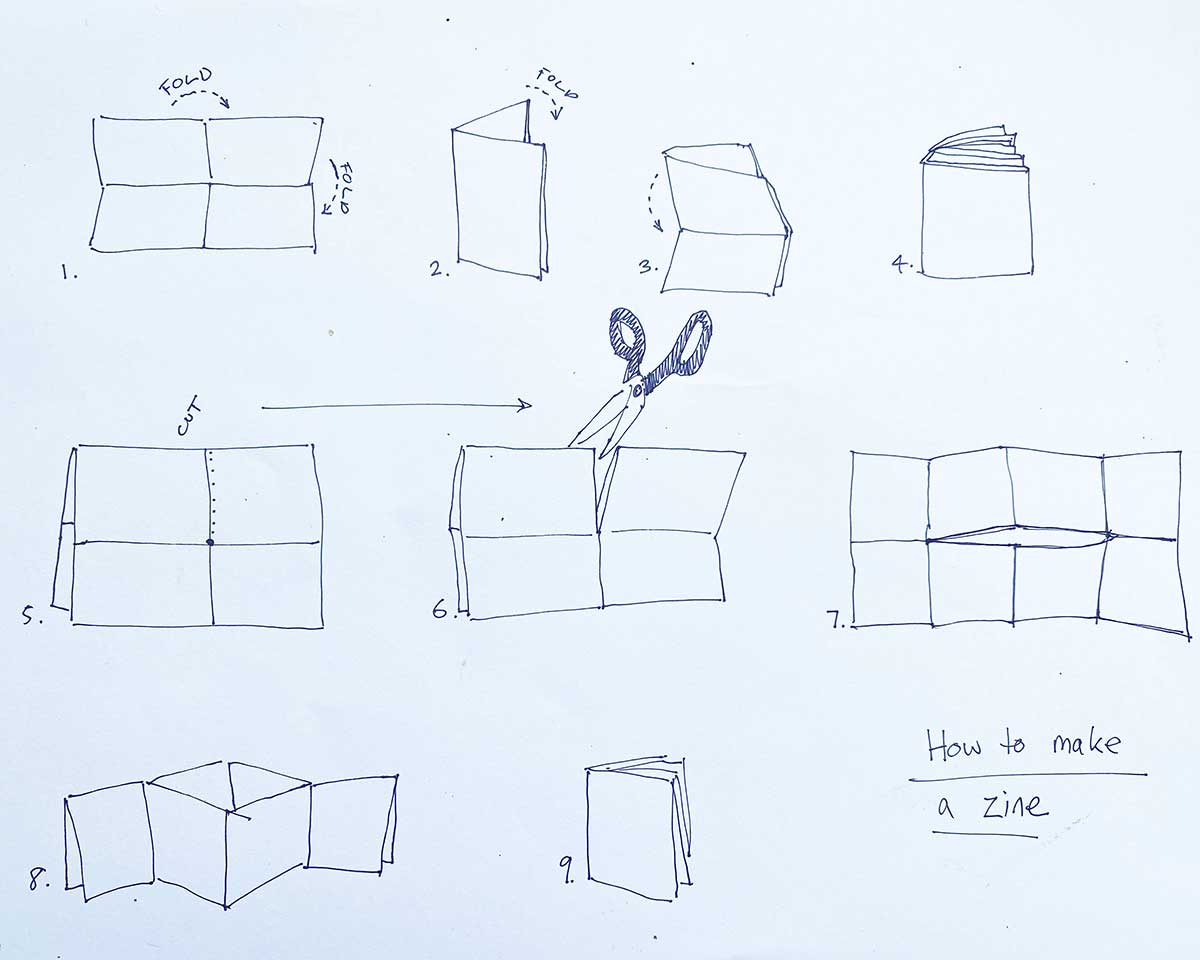 On a spare piece of paper, write down the main characters and the setting.

'The Odyssey' took place on the Island of Ithica, in a cave, and on a ship at sea. Where does your story take place? Is it in ancient times or did it happen recently?

Create a story map on a large sheet of paper. You can plan or sketch out your ideas before you start drawing. Think about what happens at the beginning, middle, and end of the story.

Using the characters and setting, plot out the events (or scenes) in the order that they happen. To make it easier you may like to divide your pages into separate boxes, drawing each scene inside the box. 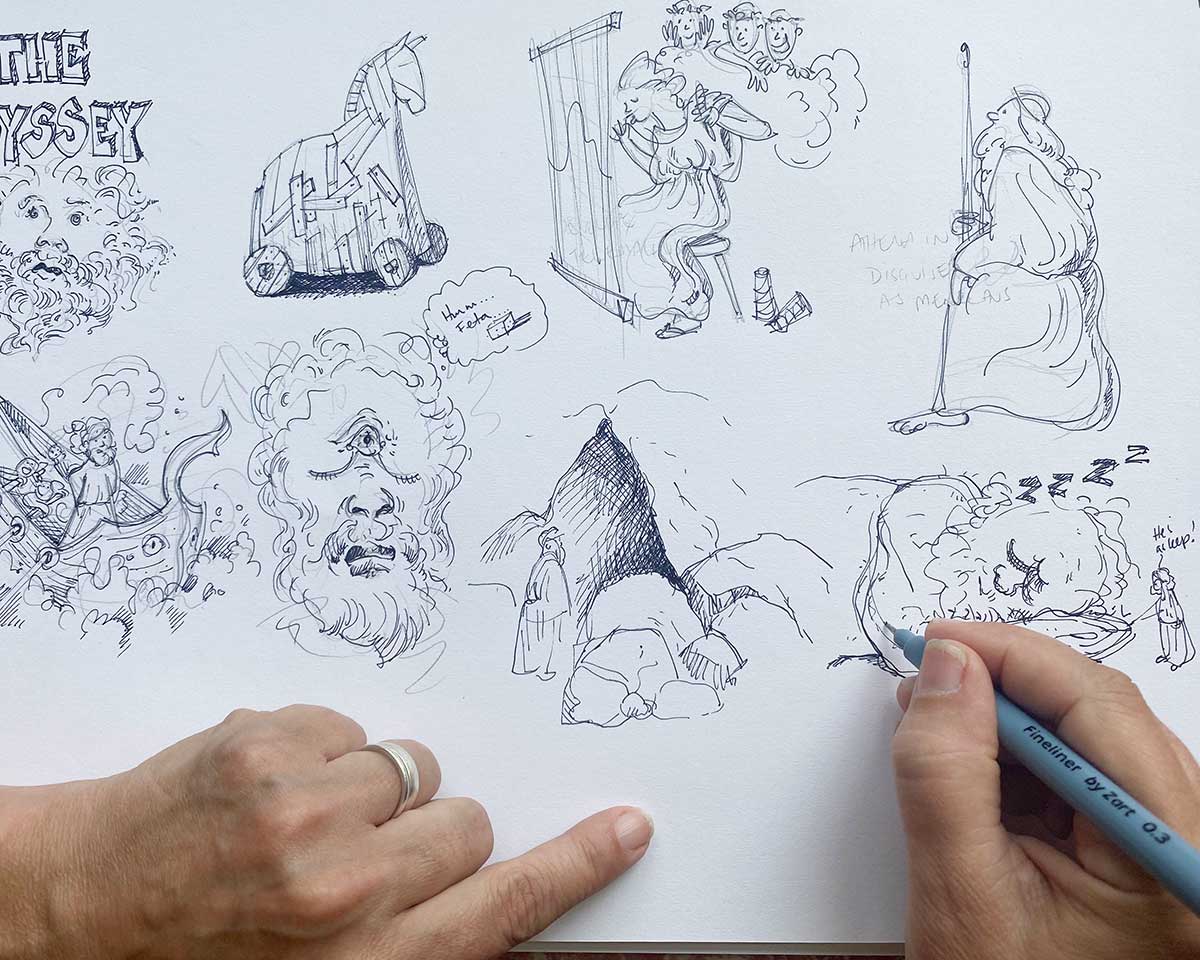 Start drawing lightly with lead pencil to make a few rough sketches (if you make a mistake, try again – you can draw over or erase pencil). These are just quick, no details, just ideas.

Continue filling in the pages in the order of your story map.

On the front page add the title. What image will you put on the title page? 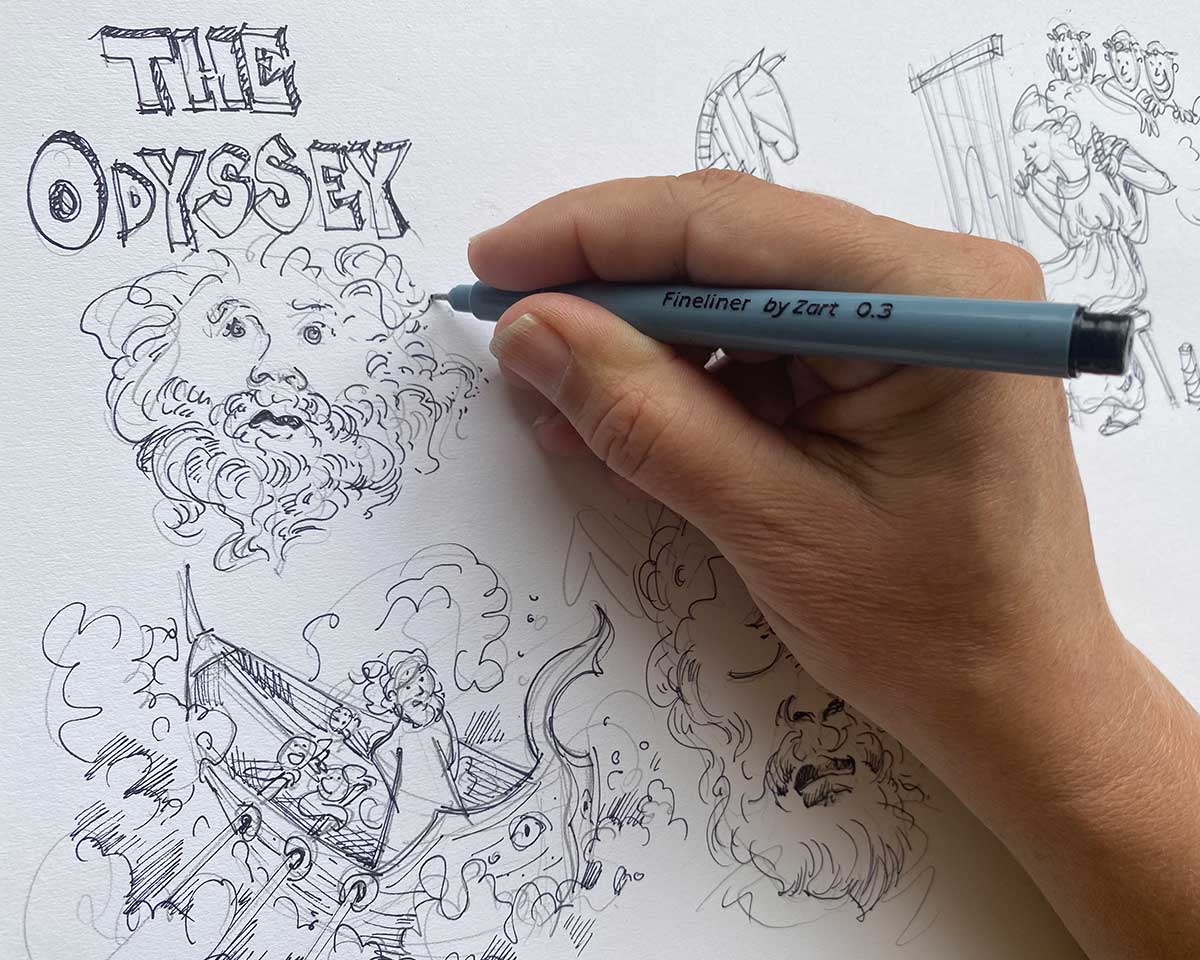 Pick a colour to add, maybe a terracotta or orange colour like we see on the bell krater.

Congratulations you’re done. Eureka! We hope you have discovered lots about the Ancient Greeks. 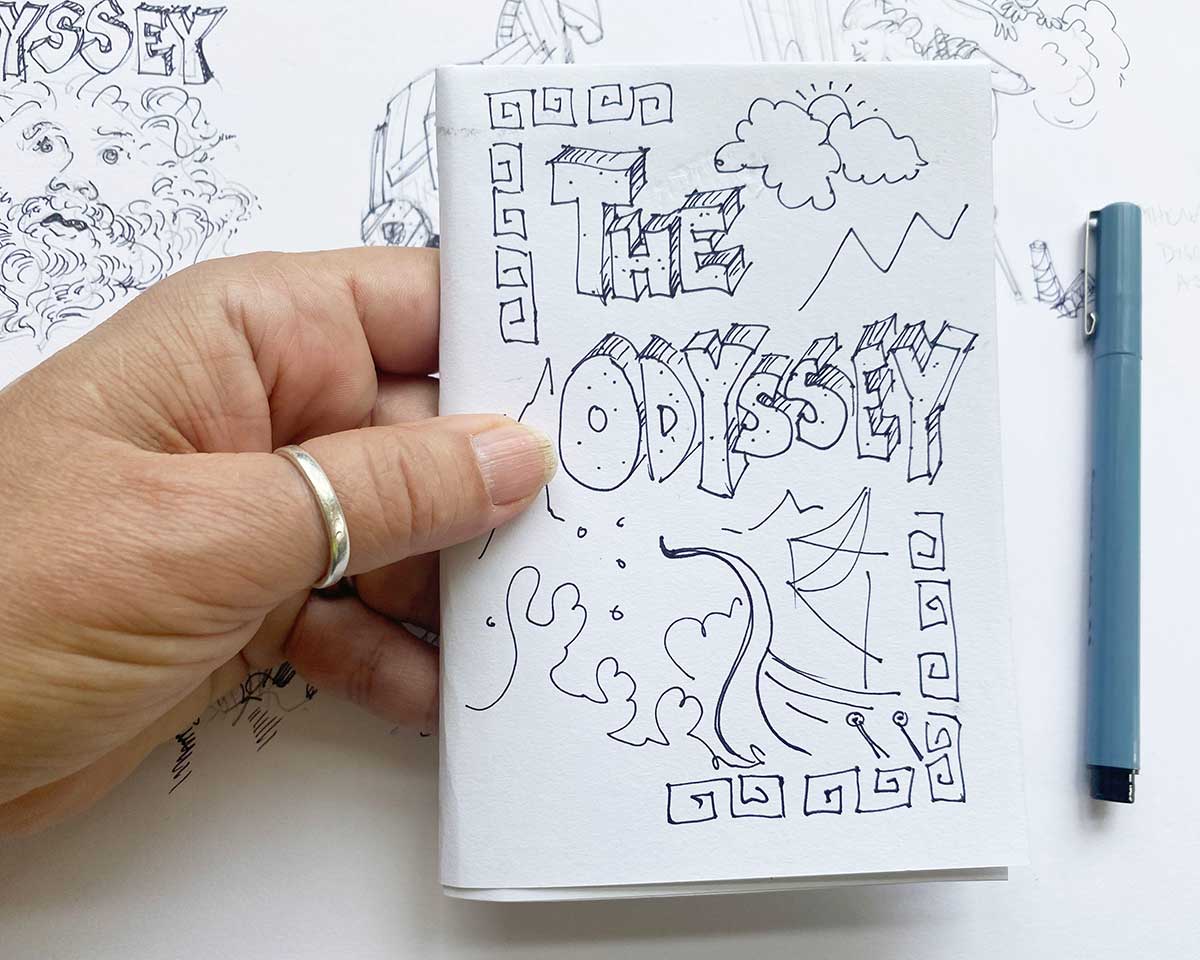 We’d love to see your creation. Email a photo to: programs@nma.gov.au

Fun facts about the Ancient Greeks: