1906: World’s first feature-length film The Story of the Kelly Gang produced in Victoria 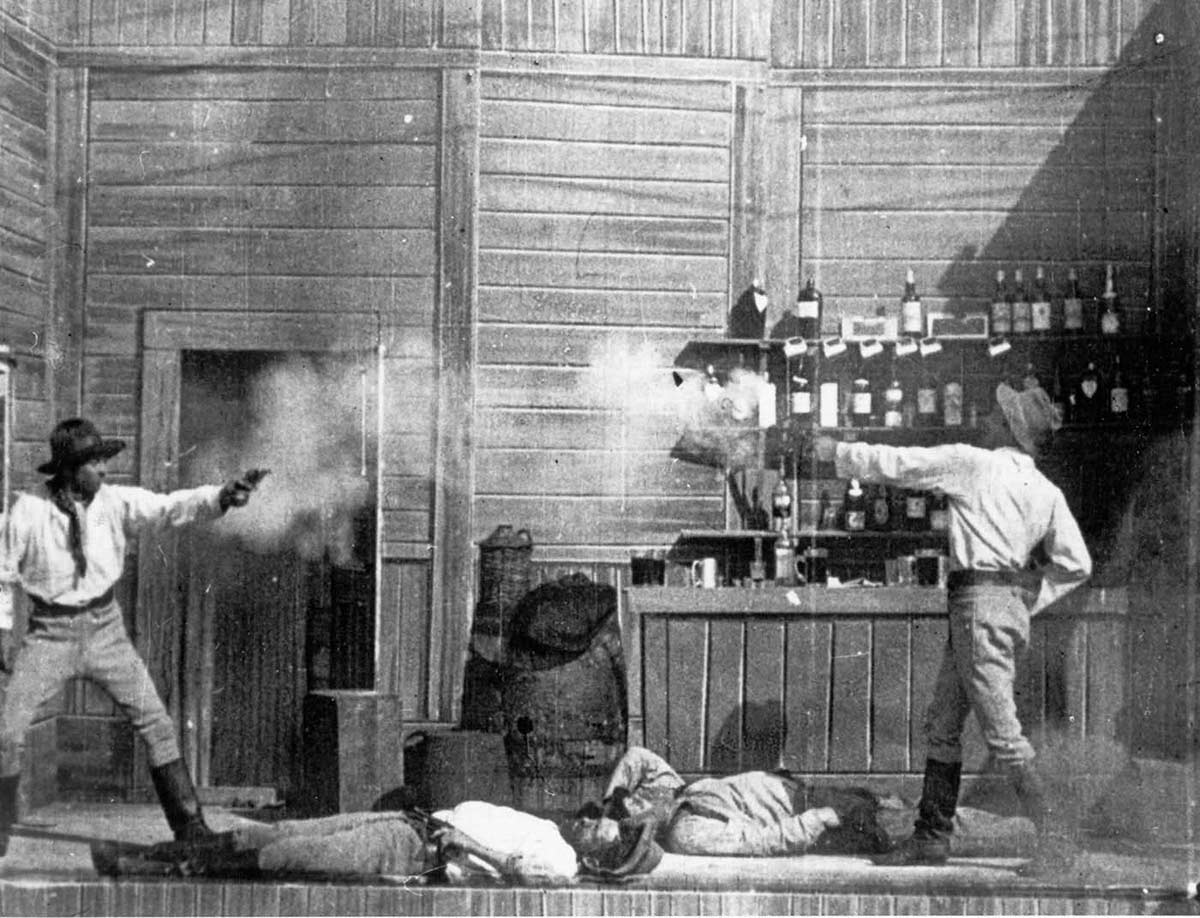 The Story of the Kelly Gang: a shoot out in the bar

On Boxing Day 1906 The Story of the Kelly Gang opened at the Athenaeum Theatre in Melbourne. It was the first multi-reel, feature-length film ever produced in the world.

The film caused controversy by presenting the Kelly gang sympathetically. The Victorian Government tried to censor it but the public flocked to screenings around Australia and then internationally.

It is difficult now, 100 years later, to imagine the impact the film must have had on audiences in 1906.

Moving films were shown to the public in the 1890s in Europe and North America by travelling exhibitors who set up in temporary spaces, or in conjunction with vaudeville programs in permanent theatres around the world.

However, the popularity of the medium made it clear that films could be presented as stand-alone entertainment and evening-long programs of silent films interspersed with sound recordings of the latest popular musicians became commonplace.

One of the first commercial film successes was the American movie The Great Train Robbery in 1903.

It was just over 10 minutes long, a typical length for the time, but it was the first film with a cohesive narrative. The Great Train Robbery’s success spread worldwide.

In Melbourne, the Tait family of five brothers, who were all involved in show business, had begun including films in their concert programs at the Athenaeum Theatre.

They had been impressed by The Great Train Robbery although it was being exhibited by a rival entrepreneur.

In early 1906 the Taits took their first step into movie production when they financed Living Hawthorne, a documentary-style short film about the Melbourne suburb.

At least five long-running stage productions had been mounted since 1880, the year of bushranger Ned Kelly’s last stand in Glenrowan, and John and Nevin Tait had been influenced by these as boys.

By the turn of the 20th century the Kelly story had become a myth that inspired millions of Australians, and the Taits saw it as a perfect subject for a longer narrative film.

The film was financed jointly by the Taits and Millard Johnson and William Gibson. By profession Johnson and Gibson were chemists, but they had acquired a projector and had begun to successfully show films to crowds around Melbourne.

Charles Tait, the brother with the most theatrical production experience, directed the movie. Some of the cast and costumes were secured from a local theatre company that had staged a recent production of the Kelly story.

The film was shot around Melbourne. The outdoor scenes were probably filmed at the estate of Charles Tait’s wife’s family near Heidelberg while some of the interior scenes were shot on sets built in the back garden of Tait’s home.

The production took six months and cost £1,000, a large amount at that time.

The film opened at the Athenaeum Theatre on Collins Street on 26 December 1906. It ran for five weeks to full houses. An actor, sometimes two, added voices to the screening and young boys were employed backstage to create sound effects.

The film opened at the Palace Theatre in Sydney in February 1907 and then moved to Adelaide and Brisbane.

The Biograph Company was employed to tour the film to regional towns across the country and by September 1907 it was being shown in New Zealand and in England where it was advertised as the ‘longest film ever made’.

The film was edited multiple times over the years and was 70 to 80 minutes long, depending on the edition.

Financially the film was a great success, with William Gibson claiming that the production had returned £25,000 to its investors.

The film depicted Ned Kelly as a hero and the police as villains. This displeased the Victorian Government and police who claimed The Story of the Kelly Gang was responsible for an increase in crime. The film was banned in Benalla and Wangaratta, towns in the north of the state with connections to the Kelly story.

In April 1912 the Victorian Government banned a revised version of the film from being screened altogether.

The Story of the Kelly Gang was shown internationally and became a starting point for the development of narrative feature films, which continue to thrive to this day.