About 1700: Beginning of trade links between Aboriginal people of northern Australia and Makasar from Sulawesi 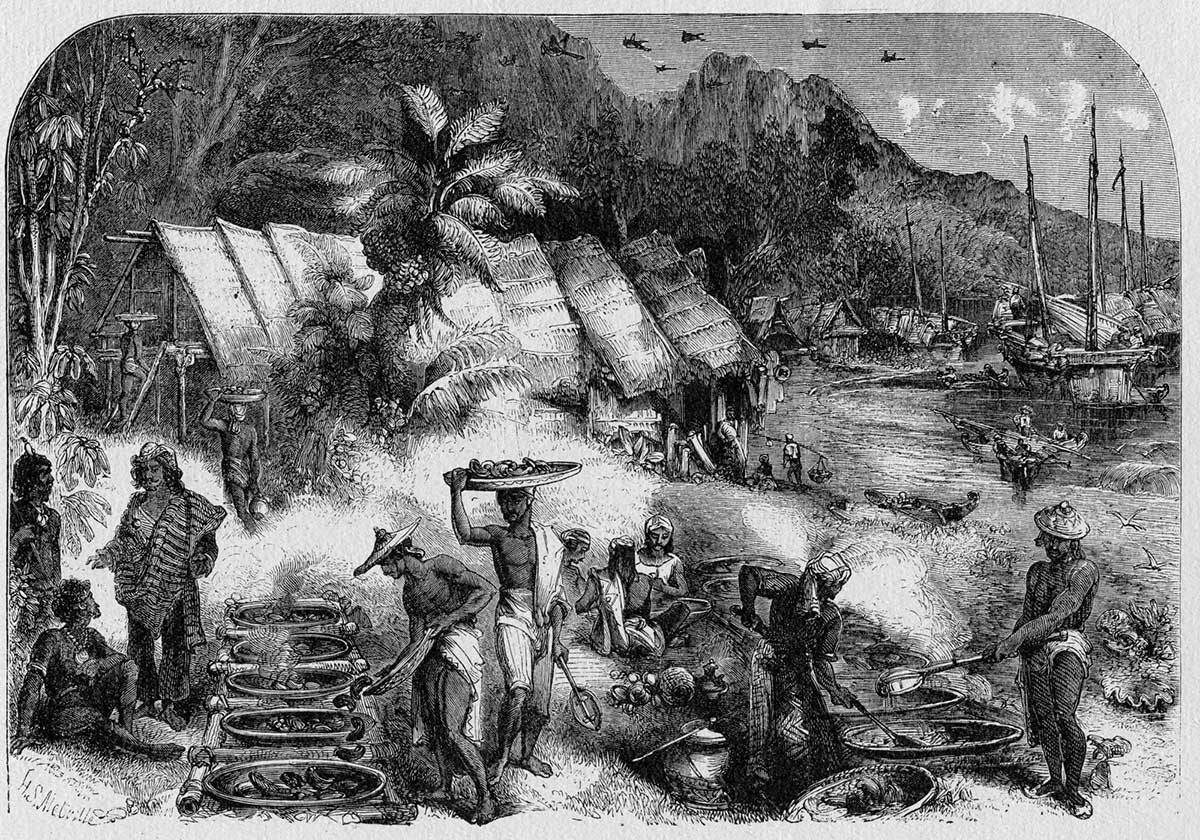 From at least 1700 until 1907, hundreds of fishermen sailed each year from Makassar on the island of Sulawesi (now Indonesia) to the Arnhem Land coast, an area they called Marege.

Makasar traded with Aboriginal people for trepang (sea cucumber), which they boiled down, dried on their boats and traded with China where it is still used for food and medicine.

The Makasar did not settle in Arnhem Land but they did have an influence on the Yolŋu people’s society and ritual.

... we learned that they were prows from Macassar, and the six Malay commanders shortly afterwards came on board in a canoe. It happened fortunately that my cook was a Malay, and through his means I was able to communicate with them. The chief of the six prows was a short, elderly man, named Pobassoo; he said there were upon the coast, in different divisions, sixty prows ...

From at least 1700 until 1907, hundreds of fishermen sailed each year from Makassar on the island of Sulawesi (now Indonesia) to the northern Australian coast, an area they called 'Marege’.

The fishermen arrived each December and camped along the Arnhem Land coast, catching, boiling and drying trepang. They met, traded and worked with local Aboriginal people.

The months that the Makasar spent harvesting in the coastal waters of northern Australia were busy ones. Fishermen speared the trepang from their praus (boats) or dived down to spike them with weighted harpoons.

On shore, trepang were gutted and boiled in sea water in iron cauldrons, then buried in hot sand to cool slowly. After some time, they were dug up and their chalky skin washed away with salt water.

Finally, the trepang were dried in the sun or smoked over a slow fire in temporary huts made of bamboo and mats.

Then, each April, as the monsoon winds began to blow, the fishermen departed, returning to Makassar with the holds of their boats holds carrying trepang to be traded north to China.

Influence on Yolŋu society and ritual

The Makasar did not settle in Arnhem Land but they did have an influence on Yolŋu society and ritual. They introduced calico, tobacco and smoking pipes, and words that are still in use today, such as rrupia (money).

Most importantly they introduced an item of technology that transformed Yolŋu life – metal. Metal blades, knives and axes made everyday practices easier for Yolŋu, from cutting food to making large dugout canoes and complex wooden sculptures.

In China, trepang was considered a culinary delight and an aphrodisiac.

By the mid-19th century the fleet from Makassar that visited Arnhem Land each year was supplying about 900 tons of trepang – about one-third of the Chinese demand.

By the end of the 19th century visits from Makasar to northern Australia to gather trepang were declining.

After 1901 the newly formed Australian Government banned trepangers from Makassar in order to protect Australia’s ‘territorial integrity’ and to encourage a local trepang industry. In 1907 the last prau from Makassar visited Arnhem Land.

Bark painting depicting Macassans boiling down trepang by Mathaman Marika, Yirrkala, 19641985.0259.0095 is one of seven bark paintings that appear on Davidson's collection list under the heading 'Bark paintings  Macassan Prau  Yirritja and Dhuwa Moieties'. The following explanation comprises two parts: a general account that precedes the individual descriptions of works and the description for 1985.0259.0095. The...
From Makassar to Marege to the Museum
Curator Alison Mercieca tells the story of the Macassan trepang, or sea slug, industry. She considers the places connected by the Macassan voyagers from Indonesia and looks at the archaeological traces left on the Arnhem Land coast.