2000: Cathy Freeman lights the Olympic flame at the Sydney Olympics and wins the 400 metres gold medal 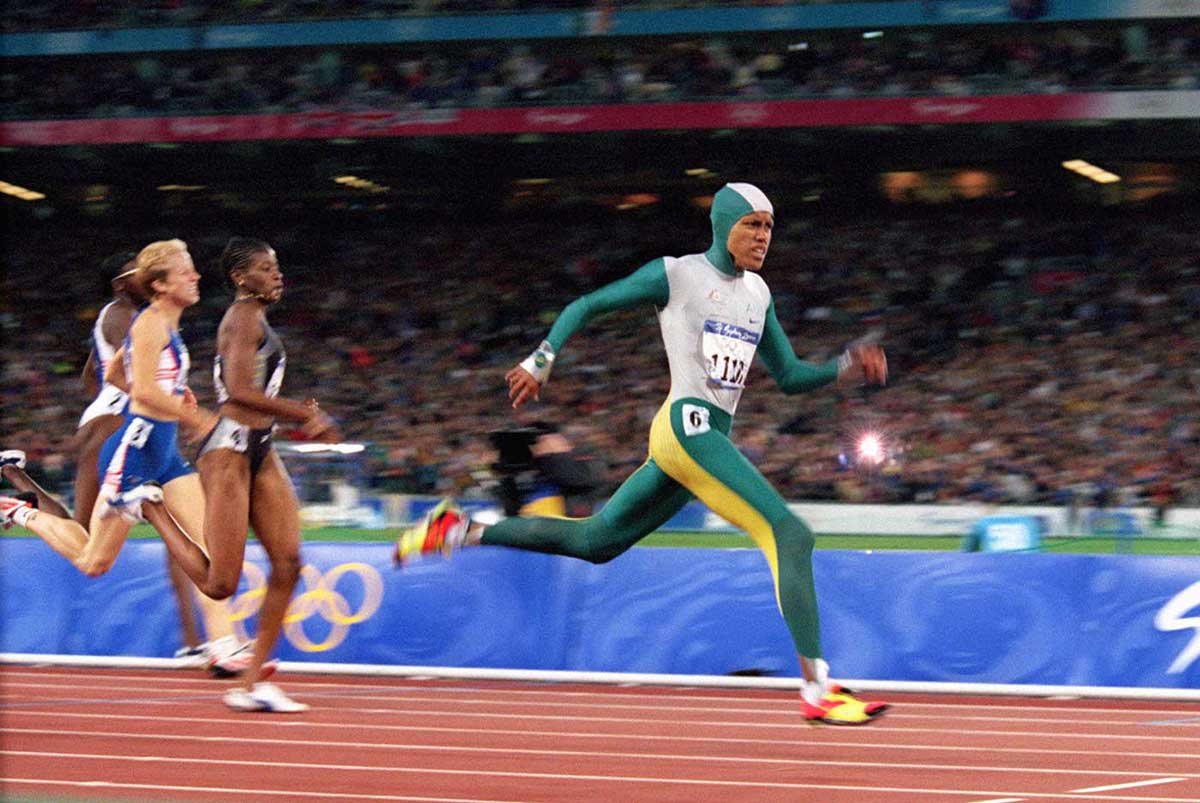 On 15 September 2000 Aboriginal athlete Cathy Freeman lit the Olympic flame in the spectacular opening ceremony of the Sydney Olympic Games.

Cathy Freeman’s mother, Cecelia, of the Kuku Yalanji people, was born on Palm Island. Her father, Norman ‘Twinkletoes’ Freeman, of the Birra Gubba mob, was born at Woorabinda in Queensland.

Freeman was born in Mackay in 1973. Always proud of her ancestry, Freeman hoped her success as an athlete would be an inspiration to all Aboriginal children.

Family is important to Freeman. Her first coach was her stepfather, Bruce Barber. And after winning her gold medal at the Sydney Olympics, the image in her mind was of her older sister, Anne-Marie, who had been born with cerebral palsy.

Anne-Marie had died from an asthma attack in 1990, three days after 16-year-old Freeman won her first gold medal at the Auckland Commonwealth Games.

As a child Freeman loved running. From her teenage years she dreamed of winning an Olympic gold medal. By 2000, when the Olympics came to Australia, she was 27 years old, and at the peak of her career. 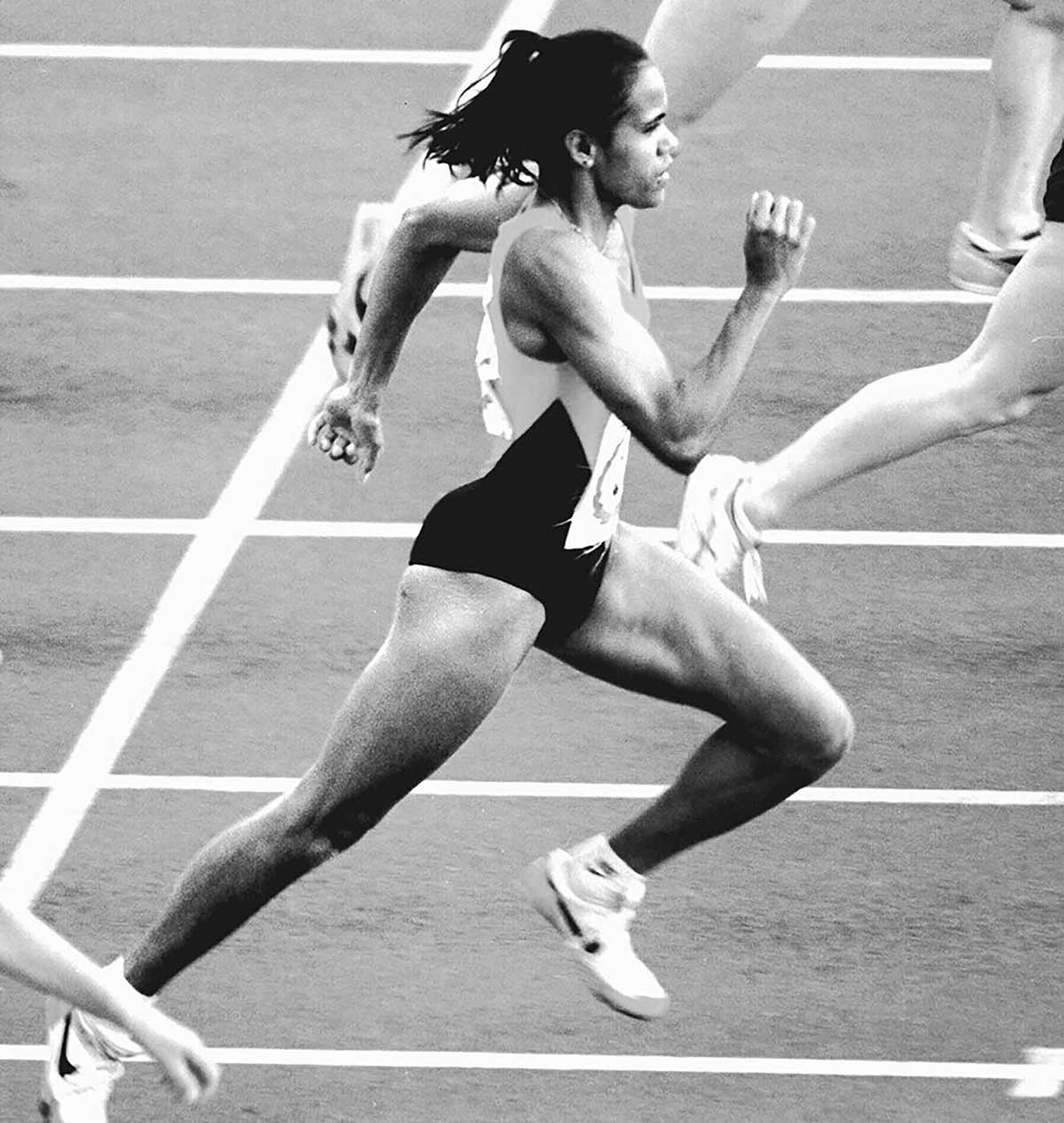 Cathy Freeman during a sprint race at Olympic Park in Melbourne, December 1995

At all Olympics since 1928 a sacred flame has been kept alight for the duration of the Games. Since the Berlin Games in 1936 the flame has been lit at Olympia, site of the ancient Greek Olympic Games, and then carried in a relay to wherever the games were being held.

In 2000 the torch was carried by 13,400 torchbearers. After Olympic champion Herb Elliott carried the torch into the stadium, the last six torchbearers were famous Australian women Olympians.

Cathy Freeman was the final torchbearer and had the honour of lighting the Olympic cauldron. She was young, female and Aboriginal, marking the organisers’ hopes that the Games would promote reconciliation in Australia.

Dressed in a white fireproof bodysuit, Freeman carried the torch up several flights of stairs. Carefully treading on submerged steps, she walked into the centre of a pool of water. The cauldron which was to hold the flame during the games rose up around her, appearing to have been lit by the torch she was carrying. 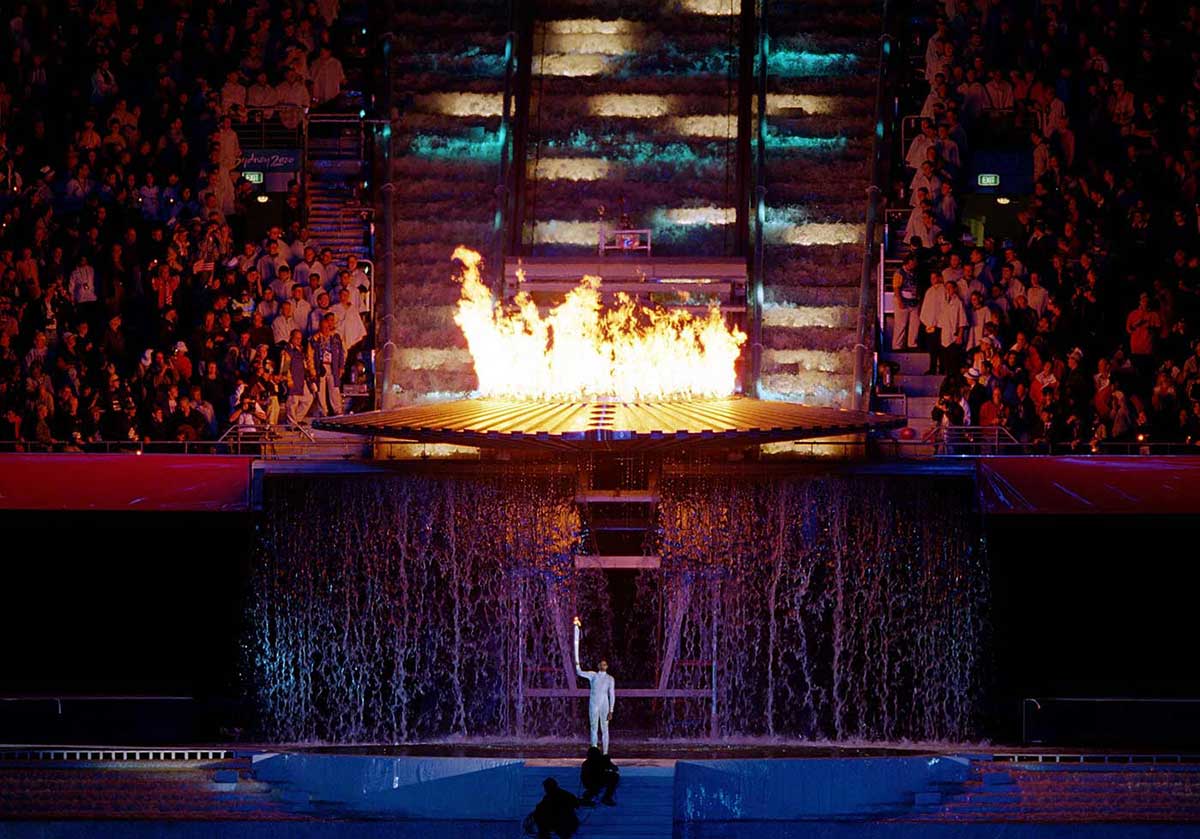 Cathy Freeman after she had just lit the Olympic flame, Sydney, 2000

Freeman’s event was the biggest on the Sydney Olympic calendar, and organisers wanted to send a powerful signal to the world about reconciliation.

When asked to light the Olympic cauldron, Freeman accepted the honour without hesitation. And when warned about the extra pressure it would bring, she replied: ‘I like pressure. It’s when I perform at my best.'

The 400-metre race was her best event and the main focus of the Games. She had won it at the Commonwealth Games in 1994, and at the World Championships in 1997 and 1999. At the previous Olympic Games, in Atlanta in 1996, she had won silver, narrowly coming in second to French legend Marie-José Pérec.

The world was hoping that Sydney would bring a rematch of that encounter. But, to Freeman’s disappointment, Pérec pulled out a few days before the race, citing the pressure of competing against a hometown favourite.

Freeman had entered the Games in good form, and comfortably won the three preliminary heats. For the final she wore a Nike Swift Suit, a green, gold and silver full bodysuit with hood which used different fabrics to reduce aerodynamic drag.

She recalled the pressure she felt as favourite:

I wanted to be an Olympic champion and I didn’t care about the goings-on around me. In my heart and with all of my soul I was ready, willing and I was very able. I had a deadly sense of self-belief. I’d go to another level and say I had a deadly sense of self-conviction where you can say whatever you want, you can do whatever you want but you’re not going to touch me.

Freeman ran a measured race. On the final bend two other runners were close to her, but in the straight Cathy powered away to win by three metres. The pressure had been huge, but she had lived up to the nation’s dreams.

Freeman was keenly aware of the many injustices done to Aboriginal people. Her own grandmother had been part of the stolen generations, forcibly taken away from her family at the age of eight. Freeman was upset that the Howard government had refused to issue an apology for this policy. As she told the London Daily Telegraph:

You have to understand that when you have a government that is so insensitive to the issues that are close to people’s hearts, that have affected so many lives for the worse, people are going to be really angry and emotional. 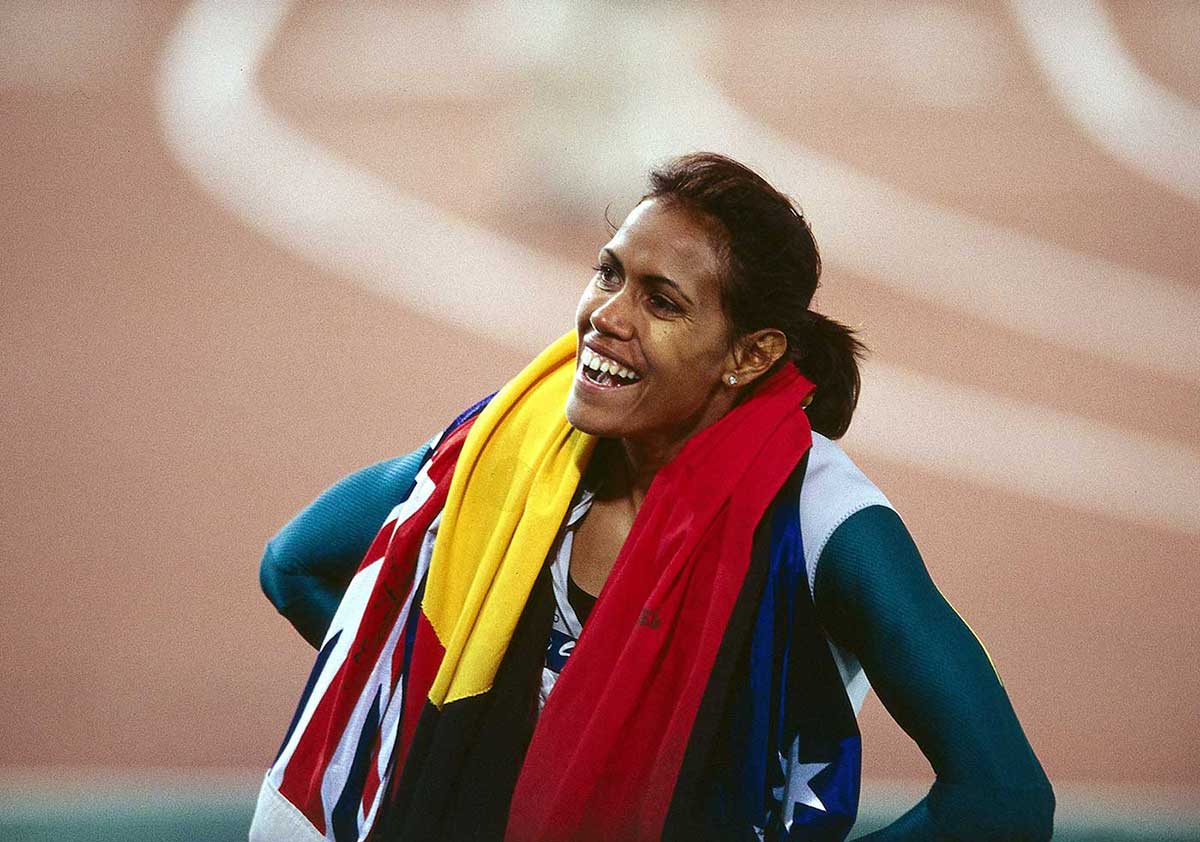 At the 1994 Commonwealth Games, after winning the gold medal for the 400 metres, she had worn both the Aboriginal and the Australian flags around her shoulders. She wanted to shout, ‘Look at me, look at my skin. I’m black and I’m the best!’

Some people criticised this as being too political. But Prime Minister Paul Keating, a strong supporter of Indigenous rights, had written to her to say that carrying both flags ‘was an important reminder of your pride in your heritage as an Aboriginal Australian’.

After winning Olympic gold in Sydney, Freeman did a victory lap in front of an ecstatic crowd of 112,000. Once again, she carried both flags. She carefully picked them up at the same time, and tied their ends together, to show that they were equally important to her.

Life after the Olympics

Cathy Freeman was named Young Australian of the Year in 1990. In 2001 she received the Medal of the Order of Australia and was named the Laureus World Sportswoman of the Year.

Freeman retired from running in 2003. Since then she has focused on a number of charities and community groups – in particular, the Cathy Freeman Foundation, which provides education opportunities to Aboriginal children. 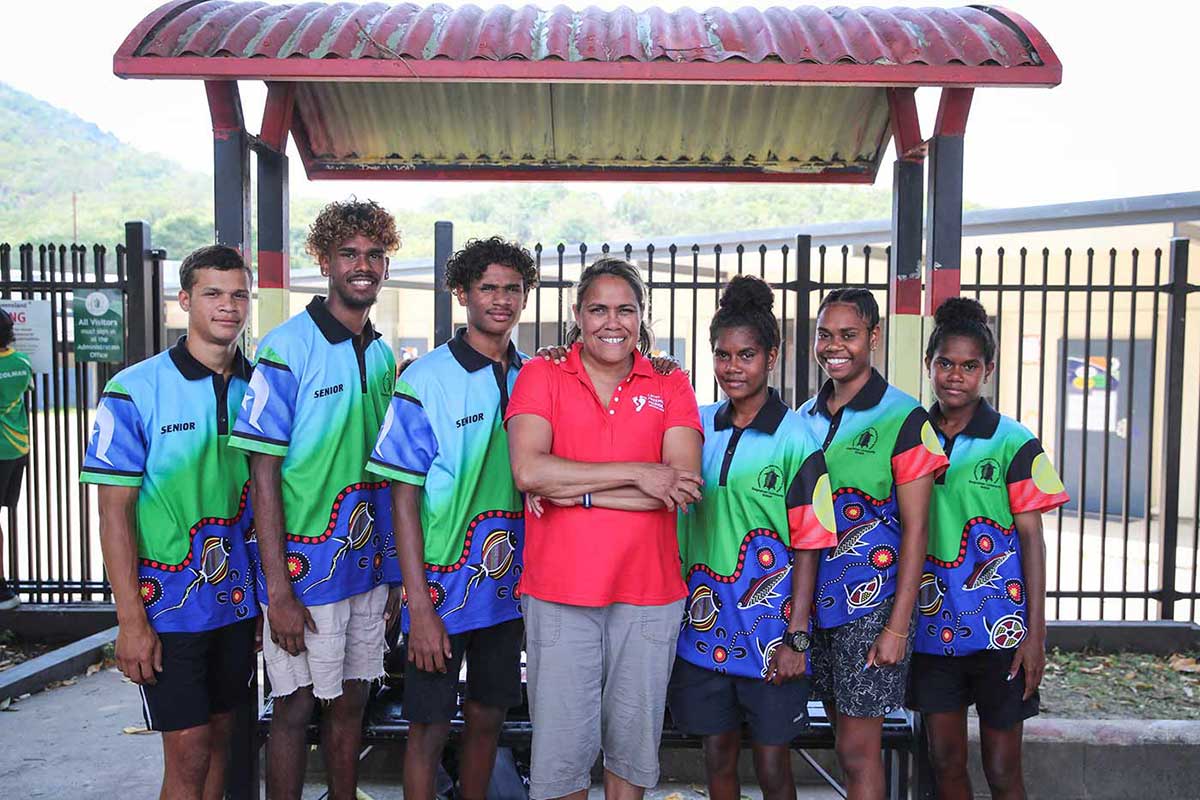 Council for Aboriginal Reconciliation poster featuring Melinda Gainsford-Taylor and Cathy FreemanA colour poster adhered to cardboard for the 'COUNCIL FOR ABORIGINAL RECONCILIATION' featuring an image of Australian sprinters Melinda Gainsford-Taylor and Cathy Freeman. There is printed text 'THE / COUNCIL'S / VISION / A united Australia ... and provides / justice and equity / for all.' on the right side and 'together we / ca...

Harry Gordon, The Time of Our Lives: Inside the Sydney Olympics, University of Queensland Press, St Lucia, Qld, 2003.