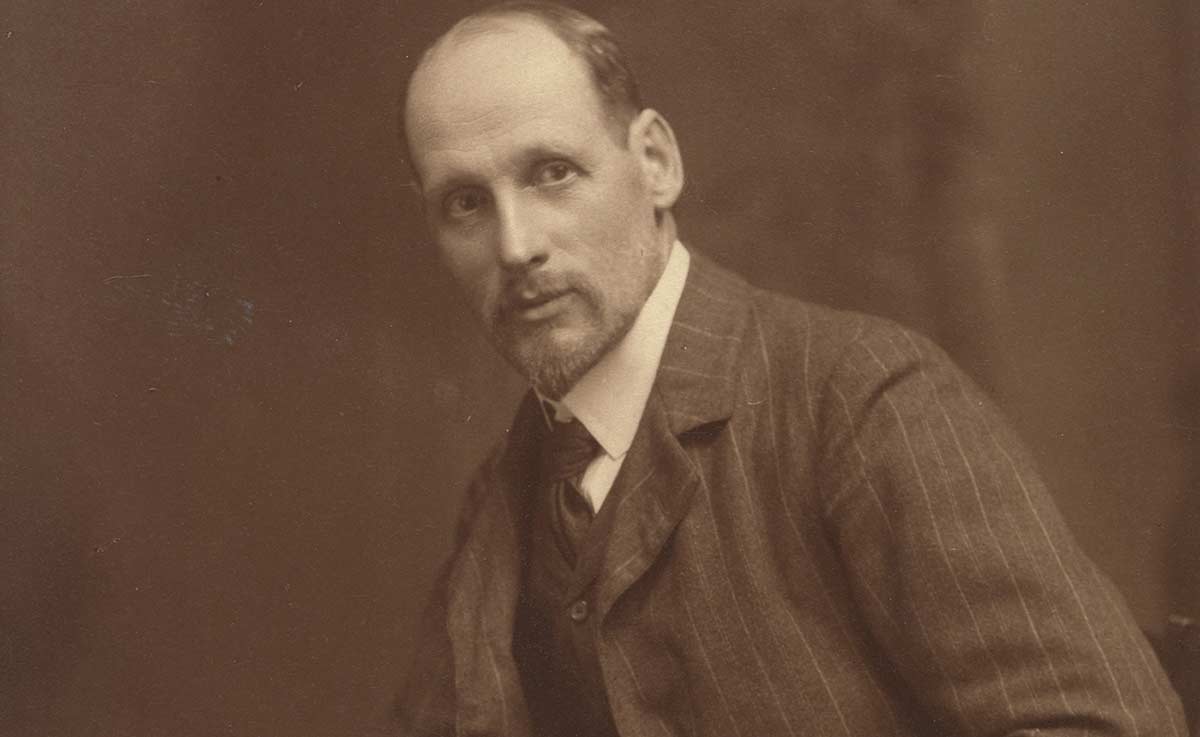 Portrait of Tom Roberts by Elliott and Fry

In 1883 the painter Tom Roberts first encountered Impressionism while on a walking tour of Spain. He returned to Australia in 1885 and inspired a group of artists willing to experiment with new forms of painting.

Roberts organised the 9 by 5 Impression Exhibition along with Charles Conder and Arthur Streeton.

This popular exhibition launched a new and powerful Australian art movement that has come to visually represent the formative period of national history around the time of federation.

Any effect of nature which moves us strongly by its beauty, whether strong or vague in its drawing, defined or indefinite in its light, rare or ordinary in colour, is worthy of our best efforts and of the love of those who love our art. Through and over all this we say we will do our best to put only the truth down, and only as much as we feel sure of seeing.

Australians in the 1880s were the richest per capita in the world. The gold rushes had brought people, money and ideas flooding into a rapidly expanding Melbourne. Between 1881 and 1891 the city’s population swelled from 268,000 to 473,000.

By the 1880s a sense of nationalism was building in the Australian population. People were yearning for stories and imagery that resonated with their newfound sense of identity.

The strong economy and a cosmopolitan population promoted a healthy appreciation of the arts, which saw the establishment of the National Gallery of Victoria in 1861 and the National Gallery School in 1870. The latter became the primary training institution for young artists in the colony.

The first master of painting at the School was the Austrian expatriate Eugene von Guerard. He modelled the School on the European academies in which he had been educated. Early students included Tom Roberts, Arthur Streeton and Charles Conder.

In 1869, at the age of 13, Tom Roberts moved with his family from England to Melbourne. As a teenager he worked as a photographer’s assistant during the day while studying art at night and eventually began classes at the National Gallery School in 1874.

After finishing his studies, he was encouraged by his teachers to train overseas and the School awarded him a travel bursary. Roberts was one of the first Australian artists selected to study at the prestigious Royal Academy of Arts in London.

Roberts travelled and painted in Europe between 1881 and 1885. In Spain in 1883 he met the artists Ramon Casas and Laurea Barrau who introduced him to Impressionism.

Impressionism was a new and exciting art form sweeping the world in the late 19th century. It originated in France but quickly spread across Europe in the 1870s and 1880s. Impressionists focused on quickly rendering the transient light and colour of a scene using rapid, loose brushstrokes to highlight the immediacy of the impression.

Painting en plein-air (in the open) was a major feature of Impressionism. Sketching outdoors had been popular since the 18th century but typically artists had used these images as studies, which became the basis of more finished studio works.

On his return to Australia in 1885, Roberts wanted to pass on his newfound approach and knowledge to his Melbourne colleagues. In 1886 a core group of artists established their first ‘Artists’ Camp’ at Box Hill on the eastern outskirts of the city. There they painted Impressionist pieces en plein-air.

Another camp was later established in Heidelberg and the artists also painted in the city’s seaside suburbs. At these locations the painters focused on the distinctly Australian landscape and light.

The paintings were also influenced by naturalism, another growing school of European art that focused on the reality of daily life rather than a romanticised image of it. This emphasis on Australian landscape and light, and the heroism of the everyday created pictures that struck a chord with a growing sense of nationalism.

The same year the Box Hill camp was set up, Roberts met Arthur Streeton while painting around the waterside suburb of Mentone. By then Streeton had completed his studies at the National Gallery School and was working as a lithographer in Collins Street.

Roberts was immediately impressed with Streeton’s paintings, which he described as ‘full of light and air’, and invited him to join the ‘Artist’s Camp’.

Like Streeton, Charles Conder also worked as a lithographer in the 1880s. He moved to Melbourne from Sydney in 1888 and soon began painting with the plein-air group at Box Hill and Heidelberg.

Roberts, Conder and Streeton decided to hold an exhibition of their work. They named it the 9 by 5 Impression Exhibition, as the majority of the works were painted on nine-by-five-inch wooden boards (many of which were cigar box lids). The small size meant the paintings could be priced to make them accessible to the general public.

It was the first major exhibition of Impressionist paintings in Australia. It was a carefully planned, marketed and presented display.

Initially the artists intended to stage the show in Roberts’ studio but changed the venue to Buxton Galleries on Swanston Street. It was a larger space located in Melbourne’s most popular gallery and artistic supply store.

The artists explained their goals as Impressionists in the exhibition catalogue:

An effect is only momentary; so an impressionist tries to find his place. Two half hours are never alike, and he who tries to paint the sunset on two successive evenings, must be more or less working from memory. So in these works, it has been the object of the artist to render faithfully, and thus obtain first records of effects widely differing, and often of very fleeting character.

The show opened on 17 August 1889 and featured 183 works, the majority created by Roberts, Conder and Streeton. The paintings’ subject matter varied widely from idyllic landscapes around the rural outskirts of Melbourne to atmospheric city views, figurative work and crowd scenes.

Particular attention was paid to the presentation of the gallery. The paintings were mounted with simple wooden frames rather than the more common gilt frames and the space was decorated with silk scarves and drapes, Japanese umbrellas, screens and vases.

This staging was inspired by the fashionable Aesthetic movement, which in contrast to traditional Victorian design focused on elegant, simple design with Oriental influences.

The exhibition was a sensation. It attracted impressive numbers of visitors but press coverage varied from curious to condemnatory. The public were generally positive; a ‘lady visitor’ reported in The Evening Standard on the opening day:

Persons interested in art should not fail to visit it. If they have no other satisfaction it will be again to have an ocular demonstration of what an artist’s ‘impression’ means.

However, the Victorian arts establishment was less than enthusiastic. Australia’s best-known art critic of the period, James Smith, said in the Argus:

Of the 180 exhibits catalogued on the present occasion, something like four-fifths pain the eye.

Despite the mixed reaction, over 80 paintings had sold by the exhibition’s end and the rest were auctioned off after closing. The show was a resounding financial success for the artists.

9 by 5 Exhibition as a Defining Moment

Roberts, Conder and Streeton went on to become key figures in the history of Australian art. They were founding members of what the American art critic Sidney Dickinson named the ‘Heidelberg School’ in 1891. This was the first truly Australian art movement.

Paintings from the 9 by 5 Impression Exhibition are held in almost all the major public galleries in Australia and retrospective exhibitions on the development of Impressionism in Australia frequently refer to them.

The Australian Impressionism movement has come to visually represent the nation during the crucial years leading up to and after Federation in 1901.