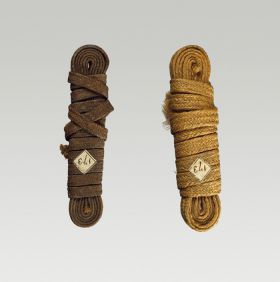 Humphrey No. 173: ‘Two Specimens of neatly plaited Tape, formed of Flax, one of them dyed red, from New Zealand.’

Brown bands made of plaited flax and wound up.

Examples of plaited cords or bands are particularly well represented in the Göttingen Collection. Clothing and textiles were often collected, in Cambridge for example, they are after weapons ‘the most frequent class of material represented in the collection’ (Shawcross 1970: 321). This is partly because the Maori willingly gave these textiles, but it is also due to the lively interest of the Europeans in these items, especially flax as a raw material. Cook remarked on the use of flax: ‘and of these they make also their strings, lines and cordage for every purpose, which are so much stronger than any thing we can make with hemp, that they will not bear a comparison’ (Hawkesworth 1773: 443). Markus Schindlbeck