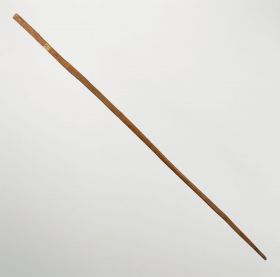 Due to its firmly adhering label with the characteristic ‘F.’, there is no doubt that the stick can be attributed to the Forster Collection. According to the entry in the Register, at 112 cm in length it may be identified as one of the ‘3 short [sticks]’.

A special feature of this very rough and at the same time non-specific, relatively thin stick with a diameter of 2.2 cm is that it was doubtless made or worked over with European tools. For about the first 20 cm of its upper end, it was carved on three sides into a rectangular shape with the aid of a metal saw, the marks from which are clearly visible. In the continuation of this part, the shaping of the staff clearly shows marks from a metal knife or hatchet. Towards the end, these marks are replaced or partially covered by those of a rasp, which was also very probably made of metal.

If Forster did not himself make this stick simply as a test of the material, the aforementioned marks are reason for the following speculation. Because none of the European tools mentioned above had been used on Tanna before Cook’s visit, and because it is known from G. Forster’s travelogue (1983: 744) that his father demonstrated the use of a steel axe to an older inhabitant of the island of Tanna, this stick might well be such a demonstration specimen.

Back to New Hebrides (Vanuatu)
Back to Tools