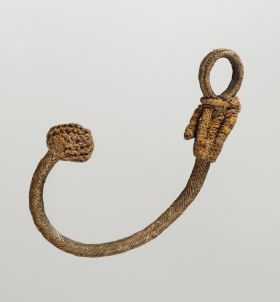 Humphrey No. 342: ‘a singular Spear-Caster from New Caledonia.’

The basic material of the object consists of a yarn nearly I mm thick, twisted out of very fine bast. The spear thrower consists of four parts. The beginning is formed by a ring-shaped loop, just fitting over a normal-sized finger. The weave of the loop consists of a wide centre strip and two flat border strips. This loop has an ornamental fringe, 2 to 3 cm wide, made from knots of a technique incomprehensible today. The basic fibre material is intertwined with single coconut fibres. From this ornamental wrapping, firmly fixed to the initial loop, the actual spear thrower emerges with a thickness of 6 to 7 mm, plaited in a herring-bone technique. It ends in a spherical, very complex knot c. 2.4 cm in diameter. The threads of the knot are at the end againtertwined with single coconut fibres.

According to various descriptions and reproductions in old travelogues, this cord was originally fastened to a spear before throwing in such a way that the thrower held the spear thrower with a finger through the initial loop at the one end, the cord being kept in an immobile position by the knot at the other end. This gave more thrust and more stability of direction to the spear when thrown (cf. e.g., Forster 1983: 740f.)

One of Humphrey’s usual labels could not be attached to this type of object and material. Although Humphrey’s text quoted above does not give a precise description, it is probably still applicable to the object here, because in connection with the old Göttingen Collection, it is always listed together with objects which are doubtless from Humphrey. Also, an example of this spear thrower has been reproduced in Cook’s travelogue (1777: II, PI. 20), which Humphrey refers to in his entry on the page facing that with the No. 342, so that he could consider the object to be adequately specified for the recipient of his consignment. For this reason, the object can almost certainly be attributed to Cook’s second voyage, with New Caledonia as the provenance.

Very similar spear throwers from Cook’s voyage are located in Sydney and in Vienna (Kaeppler 1978a: 243f.). Volker Harms

Back to New Caledonia
Back to War