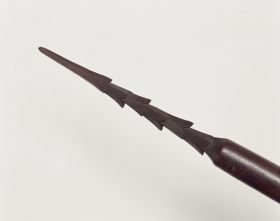 Humphrey No. 334: ‘A long Lance made of a hard kind of Wood, the point quadrangular and barbed, highly finished, and polished equal to the best european artist, from Sandwich Isles.’

The spear is made of brown wood and is polished. The point is 24 cm long with six rows of three barbs each. The preferred wood for manufacturing the spears was kauila. It was strong, dark, and appeared similar to mahogany when polished (Buck 1957: 418). Malo (1951: 20) also named koa as a wood used for making spears. The Hawaiian spears can be divided into two categories, namely those of the long and the short spears. Common to all is that they are made of one single piece of wood (Buck 1957: 418).

King (quoted in Buck 1957: 418 from the original publication of 1784) described the spears as follows: ‘The spears are of two sorts, and made of a hard solid wood, which has much the appearance of mahogany. One sort is from six to eight feet in length, finely polished ... and is furnished with four or six rows of barbs. It is not improbable that these might be used in the way of darts. The other sort, with which we saw the warriors of Owhyhee [Hawaii] and Atooi [Kaua’i] mostly armed, are twelve to fifteen feet long, and, instead of being barbed, terminated toward the point, like their dagger.’

Regarding the use of the long spears (pololu) Mitchell (1982: 276) wrote: ‘A warrior held the pololu firmly against his right side, charged, and thrust the blade into his opponent or used it to trip him.’ According to the details given, they are between about three and six metres long. The short kind, called ihe, is either barbed (such as Oz 255) or ‘tipped with a round or blade point’ Mitchell (1982: 276f.). Concerning the use of the ihe he stated: ‘The warriors hurled these weapons at times with an underhand throw, although sometimes they held them firmly with the point forward and charged the enemy ... In battle, soldiers used their ihe to ward off spears thrown at them, or they caught the spears ... and hurled them back at their opponents.’ Inken Köhler, Ulrike Rehr, Gundolf Krüger

Back to Hawaii
Back to War