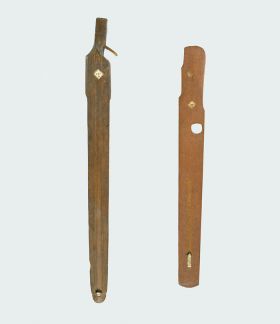 Humphrey No. 290* (290**): ‘Two wood Instruments of a very singular make, used to throw the Harpoon No. 290 with. The Harpooner puts his fore-finger in the Cavity of one, or the large hole of the other, (they being of different make) and with his Thumb & other Fingers keeps the Harpoon in a grove made for this purposes, placing the end of it against an edge piece of bone at the end of the grove which run the whole length of the instrument and darts the Harpoon into the fish overhand.’

The upper side of the wooden spear thrower features a groove to hold a spear shaft, with a bone spike inserted as a support at one end, originally held fast by a cord (notches on the side of the spear thrower are clearly visible). The lower side is also concave, with a virtually round cavity in front of the grip to support the index finger when in use. The grip is asymmetrically carved with a wooden peg on one side, tilted slightly forwards, this acting as a support for the middle finger. The part of the spear thrower immediately next to the grip is somewhat broader and separated from the rest of the board by asymmetrical shoulders.

Humphrey’s list associated both this as well as the following spear thrower with a harpoon, presumed to be from the Aleut of Unalaska, which meanwhile has unfortunately been lost. A very similar piece from the third voyage may be found in Florence, where the provenance is incorrectly given as ‘South Seas’ in the oldest list. Giglioli attributed this spear thrower to the Eskimos of Norton Sound on the basis of Mason’s (1885) examples in particular (Kaeppler 1978b: 176f., Fig. 260). However, the pieces illustrated by Mason (1885: 285f., PI. 7, 8) are of a somewhat different form, and otherwise feature a hole instead of the cavity. The spear throwers designated as Aleut by Liapunova (1975: Tab. 9, Fig. 6-10, ‘sword-like type’) and Black (1982: 100, Fig. 50) are only partly similar to the two Cook pieces in Göttingen and Florence. Moreover, they date from a period in which the external influences on Aleut culture had become much greater than in 1778. A spear thrower in the Vienna Cook Collection (cf. Black 1982: 101, Fig. 51), said to have been collected on Unalaska, has meanwhile been identified as possibly being from South Alaska (Feest 1995: 166-69). The only pictorial representation of a north-western American spear thrower from the third voyage is to be seen on the deck of a kayak of Prince William Sound. It exhibits a symmetrical, ‘sword-like’ type with a hole or cavity (Joppien/Smith 1985-88, III/2: 286f., 4.349-349A). The Göttingen inventory attributed this piece, without further justification, to the Koniag of Kodiak Island. Kaeppler (1978a: 271), referring to only one spear thrower from Göttingen, adopted Humphrey’s attribution to ‘Unalaska’.

In contrast to the previous piece, this spear thrower consists of a nearly rectangular wooden board, the cross-section of which varies from half-round (rear) to flattened (front). A short, flat groove has been cut out of the upper side, with a piece of bone at the rear end pointing forwards, serving as a support for the end of the spear. There is an egg-shaped hole for the index finger near the edge, and immediately in front of a slight, asymmetrical constriction of the board at the grip. There is also a flat depression on the upper side of the grip as a rest for the ring or little finger. The hole for the index finger ends on the underside in a furrow along the long axis, which is painted red, as is a cavity leading toward the edge on the opposite side of the grip end which has been partly broken out. Traces of red pigment may also be found on the upper side, except in the groove.

Mason (1885: 287-88, Pl. 16, 17; cf. Damas 1984: 99-100) illustrated three almost identical examples, all collected between 1869 and 1874 on the Aleutian Islands or on Kodiak, and designated these as a ‘Kadiak’ or ‘Unalashka’ type. Black (1982: 99f.) commented in this respect that the later documented examples for this type came from the territories of the Koniag and Chugach, but that their makers identified themselves as ‘Aleut’.

As early as 1767, a drawing by M.D. Levashov depicted the use of the rectangular spear thrower type by the Aleut of Unalaska. Their use on Unalaska was also illustrated by F.H. von Kittlitz in a table for Feodor Litke’s travel account of 1835; here however, the type of thrower in use is unrecognisable (Liapunova 1975: PI. 2; Henry 1984:15, 57).

Varjola, Pirjo, The Etholén Collection. The Ethnographic Alaskan Collection of Adolf Etholén and his Contemporaries in the National Museum of Finland, Helsinki, 1990.

Back to Alaska
Back to Fishing & hunting