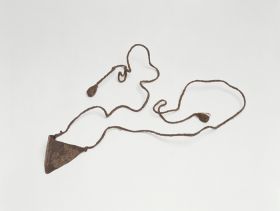 Humphrey No. 341: ‘another [sling] made of plaited Cordage, the place for the Stone of Leather, from Terra del fuego.’

Two three-ply, plaited cords made of sinews are affixed to the opposite ends of a diamond-shaped pouch, the latter made of brown leather and with traces of red pigment. One of the two cords is 5 cm longer than the other, and both end in ball-shaped bulges for a secure grip.

For use, the Selknam placed one or more stones in the pouch, which was held in the left hand, while the right hand grasped the two cords. The longer cord was held between the middle and ring fingers, while the shorter cord was held by the thumb and index finger and released after the sling was spun horizontally twice or three times, so that the stones flew out tangentially. The weapon was generally used for hunting birds, and only seldom in combat. When not being used, it was worn as a headband or around the neck (Gusinde 1931-75, I: 243f., Fig. 39). Christian F. Feest

Back to Tierra del Fuego
Back to Fishing & hunting