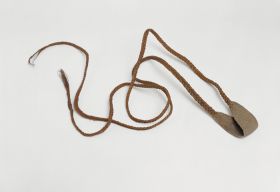 Forster Register A.18: ‘a sling from Mallicolo’

This object is a rotation sling, the pouch and sling cords of which are made as one piece. The basic material is that of coconut fibres, which at the pouch are intertwined with other plant material and plaited into tight and firm coils. The two sling cords are plaited from three braided strands of coconut fibre strings, and end in unplaited coconut fibres. At one end of the string cord, the braid-like plaiting divides over a length of 5 cm before being brought together again, and thus forms a loop. The braiding with loop formation corresponds to a detail view in Moschner (1955: 159). There is a faded Forster label on the back of the pouch.

In the sources on Cook’s voyages, slings are listed from the Society Islands, the Marquesas Islands, New Caledonia, and the New Hebrides (cf. Augustin 1993: 78). Based on the Forster register of 1799, the Göttingen sling has been listed as Oz 702 and assigned the provenance ‘Mallicolo, New Hebrides’. According to Kaeppler and Augustin (see annotation on file card Oz 702), this provenance must be incorrect. In view of the correspondence with slings from the collections in Herrnhut, Vienna, Oxford, and Florence, proven to have been acquired in the Society Islands, and to a single sling from the Webber Collection in Berne which, according to Kaeppler (1978b: 52), was erroneously catalogued as a Hawaiian object, it may be considered certain that the Göttingen specimen originated in the Society Islands as well. This assumption is supported by the fact that the slings from the other provenances mentioned above differ considerably with regard to form and material (cf. Augustin 1993: 78).

In the Society Islands, as in most of the Polynesian island groups, slings and sling stones (ma’a te ofai, cf. Henry 1928: 299) were the most usual weapons in warfare along with clubs, spears and lances (Banks 1896: 126, 177 and Beaglehole 1955, I: 132). Wallis already encountered them as highly efficient weapons: the Tahitians slung stones up to 1 kg in weight, sometimes cut and having the size of chicken eggs, to a distance of up to 200 metres at the Englishmen with great accuracy, wounding many of them (cf. Bunzendahl 1935: 98). They were the preferred weapon for battles at sea. On all three voyages, Cook and his companions watched either mock battles at sea merely as a means of entertainment, or the Tahitian fleet preparing for war where slings were used. The sling stones were either piled up in heaps in the boats or taken along in nets or baskets (cf. Cook in: Beaglehole 1961, II: 385, Forster 1989, 11: 53 and Zimmermann 1781: 41).

Parkinson (1773: 75, PI. 13, No. 1) depicted a sling from the Society Islands. Whereas the pouch of this sling corresponds to that of the Göttingen specimen, it lacks the loop described as being at the end of the sling cord which, by comparison, is clearly visible in the Herrnhut specimen (cf. Augustin 1993: 45, Fig.15). Gundolf Krüger

Back to Tahiti & Society Islands
Back to War