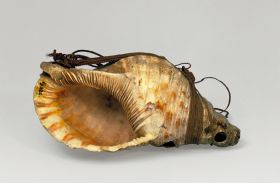 Forster Register A.16 ‘a shell trumpet from New Zealand’

The trumpet made from the shell of the species Triton tritonis has a blowhole on one side, directly underneath the tip. 6 cm below the blowhole, the piece exhibits some damage (a hole). The shell trumpet has a fibre band attached along its length so that it can be carried as if by a handle. This type of binding, round the tip of the shell and the crossover point of the same with the carrying band, indicates that the trumpet can be attributed to the Marquesas, although the Forster Register lists New Zealand as the place of origin (cf. the reproduction of a shell trumpet in Linton 1923: PI. 72, C and in von den Steinen 1928b: dT No. 2).

Linton (1923: 405) mentioned that a mouthpiece made either of a small calabash, a nut or a piece of bamboo (as described by Handy 1923: 313) was often put over the blowhole. The example in the Göttingen Collection has no such mouthpiece; however, traces of an adhesive are still visible. Shell trumpets served as signalling instruments, announcing the arrival of a ‘chief’ or the birth of a male heir. They were also used to call the people together for meetings of various kinds (work parties, warring expeditions and religious ceremonies). The shell trumpet was thought to be the ‘wife of the shark’. Instruments such as these were tapu (Handy 1923: 313). Brigitta Hauser-Schaüblin