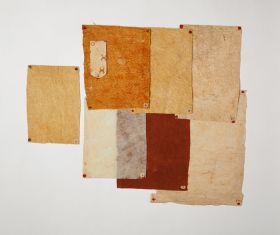 The samples are of an irregular rectangular shape. All were cut from larger pieces of barkcloth. Most of the samples have dabs of European sealing wax at the corners which probably served to reinforce the fibre material. A label is attached on to one corner of each piece with the serial numbers 1-2, 4-9 in accordance with the sequence of the inventory numbers. The samples Oz 591-595 have not been dyed, but instead exhibit a natural yellowish-white tone. Oz 596 features stamp patterns consisting of small reddish-brown circles and two tangential semicircles in the shape of a curved x (cf. Herrnhut, Inv. No. 68691; Augustin 1993: 101).

This ornamentation is characteristic for the Society Islands, which traditionally also includes other forms of circle and semicircle arrangements, as well as dots and dotted lines (cf. D’Alleva 1995). Oz 597 is dyed yellowish-red and Oz 598 reddish-brown. As G. Forster (1989, I: 273, 291, 311, 332) repeatedly emphasised, it was exclusively the ‘prominent people’ who wore clothes which were completely dyed. The colours used for dyeing have already been mentioned. Apart from G. Forster, Banks (1896: 149f.) also made detailed reports on the methods for dyeing. While the samples Oz 591, Oz 592 and Oz 598 are single-layered and exhibit fine lines caused by the barkcloth beaters, tupai, the other samples consist of several layers of soft, coarse-grained material displaying more or less recognisable traces of beating with coarser lines. The material of the fine-grained samples Oz 591 and Oz 592 is from the paper mulberry tree, aute (Broussonetia papyrifera), and was mainly used by the ari’i in the making of clothes (cf. Kaeppler 1978b: 113f.). It should be noted that the Tahitian term ‘ahu is used for barkcloth as well as for clothes, a fact which was already known to the participants of Cook’s voyages (cf. e.g. Forster 1989, I: 312). The material from which the multi-layered samples were made cannot easily be determined. In addition to aute, the bast of the breadfruit tree uru (Artocarpus incisia) as well as of the fig tree aoa, ‘ora or are (Ficus prolixa) were mainly used as the raw material. The bast of the paper mulberry tree was also frequently used together with that of the breadfruit tree in order to make tough, hard-wearing cloth (cf. Hambruch 1926: 49). Large quantities of barkcloth were brought back to Europe from Tahiti and the Society Islands and frequently cut into sample cards (cf. Kaeppler 1978a: 130). Apart from the eight ‘ahu samples of the Göttingen Collection, which are undoubtedly from the Society Islands there is also a piece of cardboard (Oz 638) with samples from various regions of Polynesia. Gundolf Krüger

Back to Tahiti & Society Islands
Back to Barkcloth