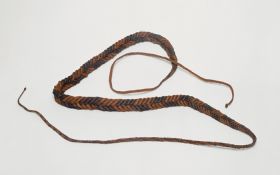 Forster Register B.10: ‘2 ropes made of coconut fibres’

The rope consists of reddish-brown and blackish-brown coconut fibre cords plaited together several times. The coconut fibre cords may have been wrapped around two parallel bundles of long fibres making the rope thicker and more stable (cf. Kaeppler 1978b: 39). The middle of the rope is about 4 cm wide, tapering off sharply towards the ends, at which there are knots. Mariner (1817b: 287) described the manufacture of the ropes and the materials used: ‘There are two kinds of rope, one made of the husk of the cocoa-nut, which is the superior sort, and the other of the inner bark of the fow. Although these ropes are made entirely by hand, yet even those of considerable circumference are laid with the greatest regularity: they are very elastic, and the strength of them is universally known. The husk of the cocoa-nut is first made into plait, which is then twisted into strands, and of these the rope is made. The bark of the fow is not first made into plait, but at once into strands.’

Anderson gave information on the use of belts or ropes of this kind: ‘Their common dress is a piece of cloth fasten’d ... with a strong roundish plaited girdle tapering at each end made from the Cocoa nut coir.’ (Beaglehole 1967, Illb: 931; cf. also Beaglehole 1967, Illa: 168). Kaeppler (1978a: 214) also presumed that ‘belts of heavy braided coconut fibre sennit were used to hold up mat or bark cloth skirts and were probably worn by men.’ Today, comparable pieces may be found in Vienna (Moschner 1955: 200; Kaeppler 1978a: 214f.) and Berne (Kaeppler 1978b: 39). Inken Köhler, Ulrike Rehr, Gundolf Krüger