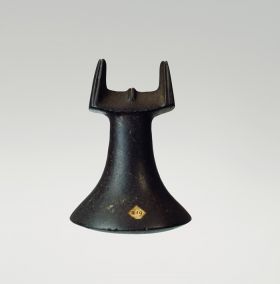 Humphrey No. 219: ‘a very uncommon shaped instrument made of the same kind of Stone as No. 209 which must have been a work of great labour. It is used by the Natives of the Society Isles to beat their Bread-fruit* into a proper consistence for keeping, which is done in large wooden trays.’

The pounder, made from a single piece, is of anthracite-coloured or black basalt. It has a fine finish and polish, but exhibits numerous pores with a brownish tone on the surface. The implement, which weighs almost 1.8 kg, consists of a pounding surface (base), a neck, and a head part, and resembles an apothecary’s pestle. The head, at right angles to the axis of the neck, forms a bar with a triangular cross-section, with two trapeze-shaped wings on its ends bent upwards with rounded tops. In the middle of the bar is a ridge running parallel to the wings. In the longitudinal axis of the ridge, and slightly off-centre, is a groove-like depression. The elongated neck, serving as a grip when in use, is oval in cross-section and continuously widens towards the elliptical pounding surface. This shows traces of wear and has small chips especially round the edges.

Pounders are still used today in the Society Islands as well as in large areas of Oceania for the preparation of food. In the past, they ranked among the most important household implements. With these, fruits and tubers could be pounded into the mash poi or popoi, rich in starch and sugar. The edible plants used for this food, sometimes later baked in the earth-oven, umu, are: taro, taro (Arum esculentum/colocasia), sweet potato, ‘umara (Convolvulus chrysorizus/lpomoea batatas), bananas, mei’a (Musa paradisaica) and, in particular, the fruits of the breadfruit tree, uru (Artocapus incisa). The mash is also frequently mixed with coconut milk or water. Early references to the preparation of poi are found in Cook (in Beaglehole 1955, l: 122), Banks (1896: 140f.), Parkinson (1773: 17, 45), and G. Forster (1989, I: 236, 326f.). Small pounders made of volcanic rock were used especially in the preparation of medicines (Bouge 1930: 3, 5, PI. II B). The fruit was pounded in round wooden bowls, papahia (according to Parkinson 1773: 39, made of the wood of the tree Guettarda speciosa), though in later times these were probably replaced by the flat, oval wooden umete bowls, the working surfaces of which were better suited to the kneading of food (cf. Silverthorne 1936: 4).

The Göttingen specimen corresponds to the illustration of the ‘Stone Pastebeater’ in Parkinson (1773:75, PI. 13; No. 10). In form and dimensions, Oz 366 best corresponds to the pounder from the Sparrman Collection in Stockholm (cf. Söderström 1939: 29, PI. 8, 2); the same wings are found on the respective pieces from the Banks Collection in Stockholm (cf. Rydén 1960: 11, Fig. 7) and the Vienna Cook Collection (cf. Moschner 1955: 171f., Fig. 35). Further pounders are to be found in the collections in Cambridge, Oxford, London, Greenwich, and Wellington, New Zealand (cf. Kaeppler 1978a: 147ff.). A comprehensive representation of all three Polynesian pounders in the Göttingen Collection has been published by Urban (1966). Gundolf Krüger