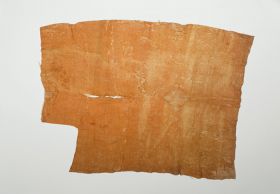 The poncho-like garment is made of several layers of thick barkcloth, ‘ahu. The upper layer shows considerable damage. A corner measuring 36 x 30 cm has been cut from the reddish-brown dyed cloth. There is a slit 30 cm long, lengthwise down the middle of the cloth. This serves as an opening for the head and gives the garment a poncho-like appearance when worn. ‘Ponchos’, tiputa, such as these consist of either a rectangular piece of barkcloth or a plaited (hand-woven) mat. The arms of the person wearing the garment had complete freedom of movement because the sides were not sewn together. In warm, dry weather, thin, single-layered tiputa were worn, other tiputa made from multi-layered barkcloth being worn in cooler weather, or at night. Especially in wet weather, tiputa made of plaited plant fibres (cf. Oz 421) were preferred. The ‘ponchos’ were sometimes held together around the hips with a belt made of barkcloth, or of twisted or plaited fibres of the coconut niu or ha’ari (Cocos nucifera). The tiputa of higher-ranking persons, apart from being made of cloth dyed red, yellow or brown, also frequently had an appliqued border of feathers in red or some other colour (cf. Banks 1896: 131; Forster 1989: I: 219; Cook in: Beaglehole 1955, I: 126; Bunzendahl 1935: 134).

Upon seeing the ‘ponchos’. Cook’s travel companions were reminded of the clothing of the inhabitants of Peru and Chile. The possible implication, that ponchos were brought by the Spaniards from South America to Tahiti, turned out to be unfounded however, because Wallis had already encountered tiputa before the Spaniards first reached Tahiti in 1772. For the same reason, they could therefore not have been imported by Bougainville, as Corney (1913, I: 304f.) presumed. They are thus an invention independent of European influence, especially, as Ihle (1939) confirmed ‘poncho like’ garments as being the traditional, pre-European clothing for large areas of Oceania. Gundolf Krüger

Corney, Bolton Glanville, The Quest and Occupation of Tahiti by Emissaries of Spain during the years 1772-1776 told in dispatches and other contemporary documents, works issued by the Hakluyt Society, London, 1913, no. 32, vol. 3.