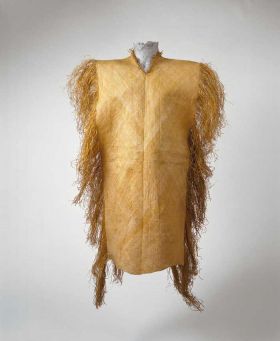 Humphrey No. 38: ‘a Child’s Garment, or Coat, made of the fibres of the plantain leaf woven together like matting, the edge fringed, from Otaheite. These are worn in rainy weather.’

The poncho-like garment consists of a soft, plaited mat. It is made from the fine purau fibres of Hibiscus tiliaceus. The natural white colour of the bast has darkened to a yellowish-brown due to the influences of weather and age. The fibre material, finely plaited in a simple technique, is woven more tightly over a width 1 cm at the edges on the long sides, resulting in a kind of selvedge. On these long sides, the finely plaited strips end in a thick fringe about 28 cm long, while the two narrow sides of the mat are worked in. The slit-like opening for the head is located in the middle of the long axis of mat and is 24 cm long. Here, the woven fibres protrude 3 cm, forming a kind of ruff.

Apart from the bark of the Hibiscus tiliaceus, the leaves of Pandanus were also used as a raw material to make plaited tiputa. Ihle (1939: 22) described the procedure itself in detail. Tiputa made of plaited mats were worn in wet weather because of their better durability compared with those made of barkcloth.

Given its small measurements, this unique and exceptionally well preserved Göttingen specimen was a child’s garment. It corresponds exactly to the tiputa of the young nose flute player depicted in Parkinson (1773: PI. 9) and thought to be the earliest pictorial evidence of plaited tiputa. Gundolf Krüger