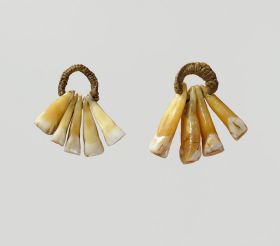 Humphrey No. 59: ‘An Ear-Ornament formed of five human Teeth strung on a plaited Cord, worn by the Cannibals of Charlotte Sound, New Zealand.’ (= Oz 296)

Earrings made of five (Oz 296) and four (Oz 297) human teeth, with holes drilled through at the root ends, hanging from a plaited ring.

Forster mentioned the purchase of ornaments with human teeth in Queen Charlotte Sound on 1 June 1773: ‘In addition to the tighi or instead of the same, some wore many strings of rowed human teeth. They considered these in no way as priceless as stated in the description of Captain Cook’s previous voyage; instead they sold them gladly in exchange for iron tools or other trifles’ (Forster 1778/80, I: 165). Apparently, alternative to hei tiki breast ornaments, the description here also refers to breast ornaments and not ear ornaments. Markus Schindlbeck