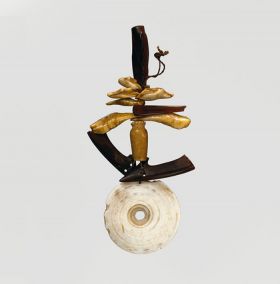 Humphrey No. 84: ‘Another like pendant with a singular Carving in bone, several teeth, supposed of fishes, and some pieces of tortoiseshell, from ditto [Friendly Isles].’

The piece consists of a number of elements tied on a string. The lowest element is a white, perforated shell disc with a diameter of 5.2 cm, and similar to Oz 183. Additional elements include two flat pieces of equally sized tortoiseshell. They are of identical form and appear similar to the point of a broken-off fish-hook. Each piece is perforated twice. The next element is a round, light yellow piece of bone, 2.5 cm long. It has an encircling groove at one end, the resulting 1 mm wide edge is also embellished with notches. This piece of bone is drilled through lengthwise. This is followed by two animal teeth, 3.5 cm and 4 cm long; a piece of tortoiseshell 3.4 cm long and notched on the long side; a pointed, yellow animal tooth, 2.5 cm long, as well as three further animal teeth; and finally a small piece of tortoise shell, 4.4 cm long, similar to those above and deeply notched on one long side.

Söderström (1939: 46) described a comparable piece in the Sparrman Collection in Stockholm. The piece also consists of diverse ornamental elements on a string: a round shell from the species Conus virgo, a part of a broken fish-hook made of tortoiseshell, a dolphin tooth, and also shell beads and small shells. According to the inventory, the piece is from ‘New Amsterdam’, present-day Tongatapu. Oz 190 may have been a woman’s pendant: ‘The womenfolk however wore several strings around their necks, in which small snails, seeds and fish teeth were put in a row, and in their middle the round cover of a snail (operculum), roughly the size of a Thaler piece [coin]’ (Forster 1989, I: 346). Inken Köhler, Ulrike Rehr, Gundolf Krüger