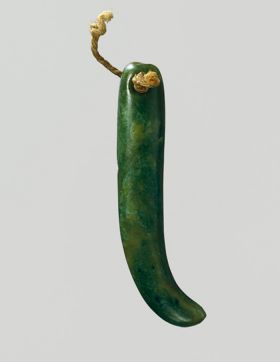 Humphrey No. 58: ‘Two Ear Bobs, made of a beautiful semi-pellucid green stone (a kind of Jasper, or Nephritic Stone) and worn by the Men of New Zealand, by whom this Stone is called Poenammoo, and which gives name to the Southern division of that large Island, being stiled by the Natives Toai Poenammoo, or Green-stone Land.’

Earrings made of dark-coloured greenstone, drilled through on with a loop made of plant material. Oz 295 is of a long form, the lower end slightly curved, Oz 294 is shorter, the lower end slanted.

According to Best (1924, II: 535), earrings were worn by both men and women. The pendants also served as symbols of rank by chiefs and their women. Various materials were used for earrings: bird feathers, flowers, but also teeth from friends or enemies, dogs and sharks. Greenstone earrings were otherwise highly prized. Occasionally, small greenstone chisels as used by wood carvers would also be worn as earrings.

Banks wrote: ‘Both sexes bord their ears and wore in them a great variety of ornaments; the holes by stretching were generally large enough to admit a finger at least’ and further on: ‘The women also often wore bunches of the down of the albatross ... [and] chissels or bodkins made of a kind of green talk [greenstone] which they value much’ (Beaglehole 1963: 16f.). Markus Schindlbeck