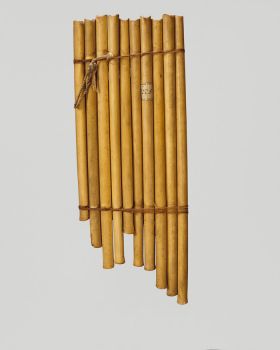 Cook (in Beaglehole 1961, II 273) described the panpipes as ‘an Organ made of ten or eleven small reeds or pipes’. The single pipes differed in length and were ‘bound together side by side’ with the open ends being in one row (Cook in Beaglehole 1961, II: 272). Forster (1989, I: 362) noted that they were made of nine or ten pipes and were bound together with coconut fibre. A panpipe produced four or five different sounds. Kaeppler (1978a: 230) agreed that the panpipes collected on Cook’s voyages usually feature either nine or ten pipes made of bamboo. Ferdon (1987: 196) speculated that the panpipe ‘seems never to have been really accepted as a musical instrument.’ He added that they were no longer mentioned after 1793. Inken Köhler, Ulrike Rehr, Gundolf Krüger

Back to Tonga
Back to Music & play