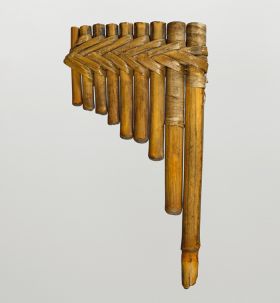 The panpipe consists of a total of nine bamboo segments. Arranged in one plane next to each other, the bamboo segments are bound together with plant fibre strips (probably from pandanus leaves) in a kind of herringbone technique. The longest and the second longest bamboo segments are otherwise bound with a narrow strip (probably from the epidermis of a pandanus leaf) on their upper edge and underneath the overall binding. With the exception of the longest bamboo segment where the lower internode remains visible from the outside, and where an additional small piece of bamboo cane juts out below, the eight remaining segments are cut directly at the internode and sanded down, so that the internodes are only visible from below to form the base of the pipes.

The object has no label. It seems there was one however, covering two of the smaller pipes. The most likely origin for the piece would be the Forster Collection, because the traces of the old label have the rectangular or square form of the Forster labels. The panpipe may have originated from the New Hebrides, because its form corresponds almost exactly to that of the panpipe that Cook depicted in his report (1777, II: 82). All the objects shown on this plate come from the New Hebrides. On the basis of these references, it is most probable that this is one of the two panpipes from the Forster Register and that the flute comes from the New Hebrides.

G. Forster’s report (1983: 775) regarding the circumstances in which he encountered such panpipes on the island of Tanna also supports the speculation that on this or similar occasion, he and his father traded with the natives for such a flute. With due caution, it may be assumed that the Göttingen panpipe is from the island of Tanna, in which case a possible indigenous name for it would be tarheinau.

Panpipes of a similar type may be found in collections in Sydney, Vienna, and Oxford (Kaeppler 1978a: 247f.). Volker Harms

Back to New Hebrides (Vanuatu)
Back to Music & play