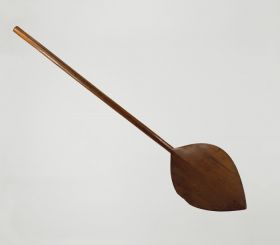 Humphrey No. 233*: ‘a large Steering paddle from the Friendly Isles.’

The paddle is made of one piece of brown wood, and features some flat cavities in the surface. The blade is oval-shaped and pointed at one end. The blade is slightly damaged at one side.

The paddle was designed for rowing rather than steering. In this regard, Cook mentioned Tongan canoes carrying ‘from three to five or even six people and are row’d with paddles of about four feet long with an oval, pointed blade which sets them along at a very quick rate.’ (Beaglehole 1967, IIIb: 936; see also Beaglehole 1961, II: 264).