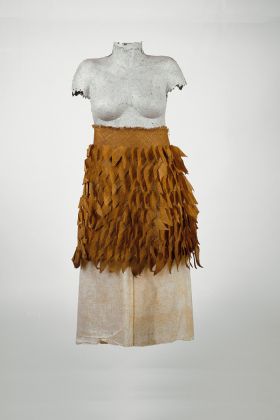 Humphrey No. 45: ‘A singular matted Cloak with projecting Leaves, curiously wrought in the making, from the Friendly Isles.’

The piece is a reddish-brown mat, made of diagonally plaited leaf strips incorporating leaf-like elements. Three edges of the mat are closed and straight, while the leaf strips fray out into strands at the upper long edge. About eight cm beneath this edge, pentagonal elements have been ‘plaited out’ of the weave in nine rows. Each of the overlapping rows consists of thirty-six to forty-two of these leaf-like elements. This piece may have been an overskirt which was worn around the hips, similar to the ta’ovala (Kaeppler 1978a: 215).

A similar piece is to be found in Stockholm. Söderström (1939: 45) presumed that mats of this type were a form of rain protection. This is unlikely however, because the decoration would tend to catch the water. Moschner (1955: 200f.) described a further mat of this type, now located in Vienna, and assumed that it was clothing worn around the hips which was only used for festivals and dances. According to Moschner, these mats are designated as egeeai. Two mats with incorporated elements, designated as egiai or vala, may be found in Florence (Kaeppler 1978b: 95-97). Two further pieces are located in Berne and designated as teunga fau and ta’ovala (Kaeppler 1978b: 37f.). Inken Köhler, Ulrike Rehr, Gundolf Krüger