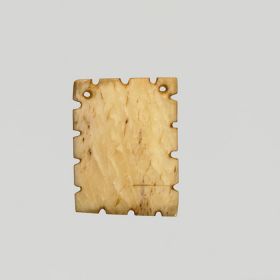 A rectangular bone plate. The longer sides each have four, and the shorter sides three half-round notches respectively. One side has perforations at the corners, probably for a cord to be pulled through (Kaeppler 1978a: 207-211).

Many small carvings of animal bone or teeth and other materials were collected on Cook’s voyages. They were worn as neck and ear ornaments, often with other elements, attached to belts and bracelets (Kaeppler 1978a: 207-11).

The following observation is from Cook: ‘Their Ornaments are Amulets, Necklaces and Bracelets, of Bone Shells and Beads of Mother of pearl, Tortoise Shell etc. these are worn by both sex ... but ear ornaments are not commonly worn, they all have their ear’s pierced’ (in: Beaglehole 1961, II: 272). Inken Köhler, Ulrike Rehr, Gundolf Krüger