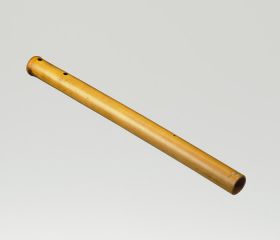 Humphrey No. 226: ‘a kind of Flute made of one joint of a Bamboo, one end of which is opened, the hole thro’ which it is blown is the opposite or unclosed end. ‘Tis performed on by the Natives of Otaheite thro’ one of the Nostrils, stopping the other with the Thumb and yield a plaintive sort of music of a few notes compose.’

The nose flute vivo (Parkinson 1773: 57) is made from a piece of bamboo cane, ‘ofe or ‘ohe (Schizostachyum sp.). In view of its yellow-brownish colour, the example here must be ‘ofe-para (yellow bamboo) (Henry 1928: 66). One end of the flute is cut straight and open, while the other is closed at the internode. The blowhole is branded into it 1 cm from the closed end. It has a diameter of 0.8 cm. A finger hole of the same size is branded into it 7.2 cm from the same end as well as a further, smaller finger hole (diameter 0.2 cm) 12.7 cm from the other, open end. A Humphrey label with the number 226 is glued to the rim of the open end. The flute has no embellishment.

According to Hickmann (1981), this is an open single transverse flute with two finger holes. According to Moschner (1955: 240), this type of flute, characteristic for Tahiti, sounds best when positioned at an angle of 30° (degrees) to the nasal septum. The sounds are varied by covering or uncovering the finger holes. Banks (1896:143) described the manner of playing in detail. Besides everyday occasions or greeting ceremonies, special festivities, heiva, but especially public appearances of the arioi in which flutes and drums were played, were mentioned in the early sources (cf. e.g. Cook in: Beaglehole 1955, I: 96, 149; 1961, II: 209, 223f., 413; Forster 1989, I: 246, 278, 321). In addition, nose flutes also served as accompanying instruments for mythological performances (cf. Wolf 1941: 46).

A nose flute typical for the Society Islands is depicted in Parkinson (1773: 75, PI. 13, No. 8). It shows the decorative wrapping made of plaited plant fibre strings, absent in the Göttingen specimen, but clearly visible in the Vienna object (cf. Moschner 1955: 241, 243, Fig. 113 and 113a). The flute of the young player depicted in Parkinson (1773: 66, PI. 9) also shows this string wrapping. As Wolf (1941: 44ff.) was able to prove in a comparative study, the Tahitian nose flute, as a rule, had such string wrappings (coconut fibres but also human hair). Apart from those in Göttingen, Kaeppler (1978a: 142) mentioned nose flutes from the Society Islands in the collections in Sydney, Vienna, Oxford, and Cambridge. Gundolf Krüger

Back to Tahiti & Society Islands
Back to Music & play