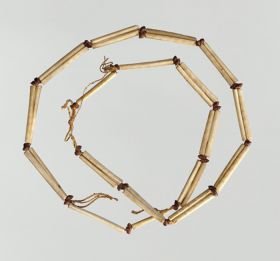 Humphrey No. 77: ‘A Necklace composed of 2 Rows of the pinion bones of Fowls between each couple of which is a small brown Shell, from the Friendly Isles.’

The necklace consists of pairs of brown snail-shells and bird bones (either single or paired) arranged alternately on a string. The bird bones are between 3.5 and 5.5 cm long. Cook (in Beaglehole 1961, II: 272) listed necklaces along with amulets and bracelets as being ornaments worn by the Tongans. They were made ‘of Bone Shells and Beads of Mother of pearl, Tortoise Shell &ca these are worn by both sex ...’