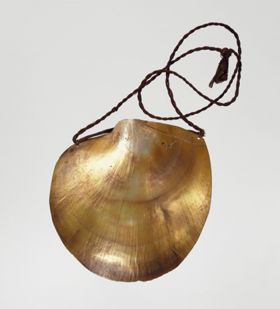 One piece of a two-piece neck ornament consisting of two mussel shells, each with its own neckband. The mother-of-pearl layer of the two shells, smooth on both sides, has an iridescent colour, from whitish-yellow on the inside to white-yellow and reddish-brown on the outside. The shells each have three perforations on the base for securing the neckband. The latter, consisting of twisted coconut fibres with their ends knotted together, is firmly tied on to the perforations with thin coconut fibre threads pulled through the holes. In the object Oz 404 b, now only still secured to two perforations, the suspension thread runs from one perforation to the other in a strikingly twisted manner (similar to a comparable piece in the Herrnhut Collection, Inv. 68671).

There is no reference to such a neck ornament from the Society Islands in any of the published sources from Cook’s voyages. However, a similar neck ornament is depicted in a drawing by William Hodges showing an ‘old man from Tongatapu’ (Tonga Islands), now located in the National Library of Australia, Canberra (E 753) (cf. Joppien/Smith 1985, II: 184, Fig. 2.76). Only two perforations at the base of the shell for fastening the neckband can be recognised on this ornament, however. According to Augustin’s research (1993: 63f.) and his oral confirmation of 27.7.1996, Tahiti may be assumed to be the provenance on the basis of the clearly visible triple perforation of the linked three-piece neck ornaments from the Herrnhut and the Berne collections, as well as the unlinked two-piece Göttingen neck ornament. Given the completely preserved suspension thread and the way it is fastened, as well as the positioning of the perforations at the upper rim of the shell base and the smooth mother-of-pearl surface, it may be assumed that the two mussel shells, are not clappers (cf. Oz 165b, Oz 166, Oz 405 a, b) but rather a rare ornament from either Tahiti or the Society Islands (cf. Augustin 1993: Fig. 7; Kaeppler 1978b: Fig. 47). Gundolf Krüger