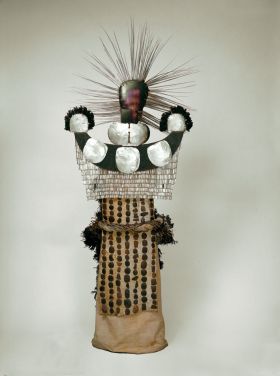 Humphrey No. 102*: ‘A very singular kind of Dress, worn by the person called a Chief Mourner ... consisting of l.st A Cloak or Mantle formed of Cock’s Feathers fastened to a rude kind of Netting made of Cordage with Sticks placed across, from one of the Corners of which proceeds a Ruff or Tassel made of white Feathers.

2.dly A fantastic Head-piece made of two large Mother o’pearl Shells having their outer Coats taken off, tied together by the thick ends which are cut strait, with plaited Cordage. The joints where the Shells meet is hid with carved pieces of Tortoiseshell. Round the inside near the edge is a cord wolded over with neatly plaited Cordage, and fastened to the Mother o’pearl Shells with the like plaited Cordage. These Shells serve as a Mask, & in one of them is a hole for the Wearer to see through. - On the Top of this Mask are two pieces of very large purple pinna Marina Shells, the edges of which are tied together and to the Mask with plaited Cordage ... From the outer edges proceeds a row of black and white Tail-Feathers of the Tropic-Bird, which are fastened to the pinna shells with Bark Cloth tied on with plaited Cordage, and Gum, and form a kind of Glory.

3.rdly A kind of Breast-plate made of a thin piece of wood, formed in shape of a Crescent, painted black, and ornamented with five Valves of the Mother o’pearl Shell, uncoated, tied on at equal Distances: the two which are affixed to the ends are tied on by their edges to those of the board; and are bordered on the outside with the dark green feathers of the poee-bird. - To the largest of the curved edges, which is placed downwards, are tied seven Rows of thin pieces of Mother o’pearl ... which are placed in strait lines...

4.thly A kind of Mantle ... This is formed of two pieces of Bark Cloth half of which is white the other half coloured red lengthwise, the two pieces are quilted together but the part which hangs before has a great number of pieces of Cocoa nut formed in a variety of round oval and angulated shapes, and two oval pieces of the leopard Cowry Shell. Then pieces are placed seperately & are quilted on flat to the Cloth which in this part is lined with fine white Matting.

5.thly A sort of a Cloak, made of Bark Cloth, gathered up at one end, and fastened to a matted Cap which goes on to the head: This part is decorated with feathers and small bunches of dog’s hair, and to this the other parts of the Head-Dress are affixed.

6.thly A Belt about five inches in circumference, made of white Bark Cloth, slightly twisted. Between the Strands a Cord, made also of Bark Cloth slightly or half wolded with a black Whith and four times doubled is also twisted or worked round...’

Because of Humphrey’s very detailed annotation and Plischke’s publication on the Göttingen mourning dress (1931: 4-9), the following are intended merely as some concluding remarks:

1. The brow ornament, pateea, consists of four (originally probably five) pieces of the reddish-brown shell, Pinna nobilis, held together with coconut fibre strings. A pad made of whitish barkcloth is fastened with strings at the back of this head-piece. Tail feathers of the ‘tropical bird’ (family Phaethontidae) have been inserted between the plate and the pad, held closely together by their quills, which radiate out from the head-piece.

2. The head-piece and the mask-like face cover beneath, parae, are joined with the aid of strings threaded through corresponding drilled holes. The face mask consists of two semi-circular mother-of-pearl shells. The spot where the two mother-of-pearl shells (14.5 x 28 cm) meet is covered with narrow, tortoiseshell strips cut in a zigzag pattern. The disc on the right features a slit 1.5 cm long which serves as a visor.

3. Neck and breast ornaments, paooto, consist of a crescent-shaped board, dyed black, with a span of 71 cm. At both ends of this board, which have been cut at right angles, there is a mother-of-pearl shell (11 x 12 cm) tightly fastened with string. Attached around the discs in the same fashion is a rosette of blue and greenish-black feathers (probably: ‘green pigeon’, Parkinson 1773: 70), as well as three further mother-of-pearl discs in the centre of the board. The lower edge of the board features holes close to one another. Thin strings threaded through these holes secure a breast frill, hoopa, made of over a thousand narrow, rectangularly cut, tiny mother-of-pearl slips (average width: 0.3 cm) held together with loose, movable strings.

4. The robe consists of undyed strips of whitish barkcloth, ‘ahu, (overall length: 190 cm), with a head opening (cf. tiputa). To stiffen it, it has been sewn on to a finely plaited mat with seven rows of string running lengthwise. The front of this piece is decorated with a frill made of seven rows of small round-oval coconut discs and some small pieces of cowry shell. Also belonging to the robe is a belt made of natural-coloured barkcloth (length 94 cm, thickness 4 to 5 cm). It has been twisted, and is held in this shape by narrow strips of reddish-brown barkcloth. The back of the robe consists of numerous strings in a net-like arrangement with tufts of greyish-black cock feathers affixed. The section (length 100 cm, width 35 cm) is reinforced by five small, diagonal wooden sticks affixed to the strings running lengthwise.

A comparison of the Göttingen mourning dress with G. Forster’s in situ observations (1989,11: 59f.) reveals that it may be considered a complete specimen. Various illustrations by Cook’s travel companions confirm this (cf. Joppien/Smith 1985, I: 111; 1985, II: 167; 1988, lll: 368f.). Comparable complete specimens proven to have been acquired during Cook’s voyages are located in collections in Honolulu, London (British Museum), Oxford, and Florence. Parts of Tahitian mourning dresses are to be found in collections in St. Petersburg, Sydney, Wellington (New Zealand), and Berne (cf. Kaeppler 1978a: 122ff.). A possibly older mourning dress, believed to date back to Bougainville’s global circumnavigation, is to be found in the Museum fur Völkerkunde (Museum for Ethnology) in Berlin-Dahlem. Gundolf Krüger

Back to Tahiti & Society Islands
Back to Ritual