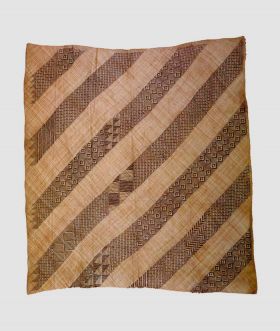 This mat is plaited out of leaf strips c. 3 mm wide. The light brown strips are plaited diagonally and are without a pattern. The patterns in the dark diagonals arise because light and dark brown leaf strips are interwoven in different ways. Herring-bone patterns (chevron), checks combined with one another, squares, triangles and other geometric patterns may be recognised on the surface. Three edges are straight and closed; on one edge it may be seen that the mat has been cut apart (cf. Kaeppler 1978a: 217).

Kaeppler (1971: 211, PI. 2a) mentioned a similar pandanus mat in Oxford with unpatterned light, and patterned dark diagonals. In contrast to the Göttingen mat however, the diagonal stripes are not continuously plaited into the mat. Certain matapule (ceremonial attendants) wore mats of this type. Another mat similar to the Göttingen piece Oz 141 is to be found in Florence (Kaeppler 1978b: 103).

The ‘Friendly Islands’ are stated in the Göttingen inventory as being the origin of the mat Oz 141. In contrast, there is a photograph of a mat in the catalogue ‘Ozeanien. Kunst und Kultur’ (Kaeppler e.a. 1994b: 501 and Fig. 383) which is almost identical to the one in Göttingen. The origin is given as the Cook Islands, because the photograph features the caption ‘Mat, Cook Islands, detail. Pandanus fibres’. This mat is now located in the British Museum in London. For further details of mats of the Cook Islands, see also Hiroa (1927 and 1944). Inken Köhler, Ulrike Rehr, Gundolf Krüger

Back to Tonga
Back to Ritual