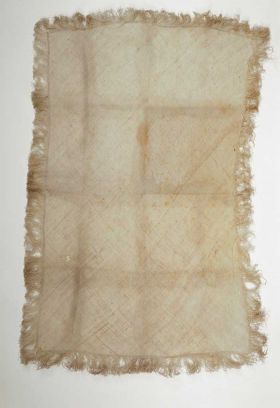 This is a very finely plaited mat made of a white plant material. The leaf strips, 1-2 mm wide, are diagonally plaited. The four edges are fringed. Parts of the piece are dyed in a dirty colour.

This is probably a mat of the Samoan ‘ie sina type, which was worn as clothing on particular occasions.

Mariner (1817b: 293f. and a: 134) already reported that mats used as clothing were imported into Tonga from Samoa. He witnessed the marriage of the daughter of the chief Finau, the bride clothed ‘in the choicest mats of the Navigator’s islands [Samoa], of the finest texture, and as soft as silk; so many of these costly mats were wrapped round her, perhaps more than forty yards, that her arms stuck out from her body in a ludicrous manner’ (Mariner 1817a: 134).

A similar piece in the Lever Museum is considered to be missing (Kaeppler 1978a: 216). Inken Köhler, Ulrike Rehr, Gundolf Krüger