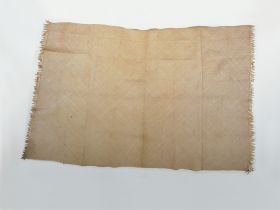 The mat is made of diagonally plaited leaf strips, light yellow and 3 mm wide. These leaf strips are so arranged and inter-woven that an alternation of glossy and matt leaf strips is recognisable. The long edges of the mat are formed into a straight border, i.e., each leaf strip is turned over at the edge, and interwoven again after several rows. On the wide edges, the leaf edges end in loose strands. In addition, triangular points made of a plant material are sewn on to these edges.

Mats of the kie efu type were presented for ceremonies, e.g., for burials. A very similar mat with respect to weave and edge decoration may be found in the Berne Museum, and is of the lou kie type made of pandanus. This mat may have been used as a sleeping mat, given the description on an old label: ‘a mat of the fine ... used for floor in the friendly...’ (Kaeppler 1978b: 39). Two further pandanus mats, which presumably served as floor mats, are located in Vienna (Moschner 1955: 199f.; Kaeppler 1978a: 217).

Cook referred to Tongan mats and their use in general as follows: ‘They also make various sorts of Matts of a very fine texture which serve them both for Cloathing and beding. Their Dress is a piece of Cloth or Matting wraped round their Middle reaching from the breast down below the knee, they seldom wear any thing over their Shoulders or upon their heads. The dress of the Men and Women are the same.’ ‘ ... the thick and strong sort [of matting] is used to Sleep on and to make sails for their Canoes...’ (Beaglehole 1961, II: 266f., 272).

Mariner (1817b: 275) later reported on the division of labor according to gender in the handicrafts: ‘... among these [arts] are principally the art of performing surgical operations; erecting fortifications; making ropes, bows and arrows, clubs and spears, which are practised by men, whilst the manufacture of gnatoo, mats, baskets, thread, combs etc., constitute the occasional employment of the women, even of those of rank.’ Inken Köhler, Ulrike Rehr, Gundolf Krüger

Mariner, William, An Account of the Natives of the Tonga Islands in the South Pacific Ocean, 2 vols, London, 1817.

Back to Tonga
Back to Mats