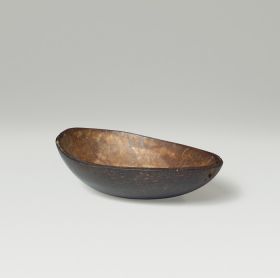 The kava cup consists of a half coconut shell and has an oval form. It is polished on the inner as well as on the outer surface. There is a small, raised oval area (4 x 2.5 cm) in the middle of the outer surface. In contrast to the rest of the surface, it is flat instead of rounded.

The Hawaiian ipu ‘awa were made from the shells of ripe coconuts and were polished. They can be distinguished from other Polynesian cups by their oval shape. Unlike the others, the Hawaiian cups are made by cutting the coconut from the more pointed end to the blunter end. The kava cups used by the kahuna (priests) were of a slightly different form. They were also cut lengthwise, but above the middle line. They were therefore higher and became narrower towards the opening (Buck 1957: 70). Buck called the elongated Hawaiian cups ‘olo ‘awa. He speculated that this term was used in order to differentiate these cups from others with a round opening. Pukui & Elbert (1986: 285) translated ‘olo as a ‘long gourd container used as a receptacle, as for kava or water.’

The kava beverage, or ‘awa, was made of the roots of the kava-plant (Piper methysticum). ‘The ‘awa beverage was used as a refreshing drink by the aristocracy, by agriculturalists and fishermen, and probably by commoners when they could get a supply. It was used as a medicine and as an offering to the gods and in various other ways’ (Buck 1957: 66).

Prolonged or excessive kava drinking led to visible bodily changes, especially of the eyes and skin. ‘The next... is ... the excess of the Kava. In these People the skin looks as if parchd by the Weather, It is of a blackish appearance, but in its excess, it is mixt with a whiter Cast, & Scales peal of the Skin; the Eyes are red, inflamd, & very sore, the body is Ememecat’d [emaciated] & infirm, & it makes them very stupid’ (King in Beaglehole 1967, Illa: 629). Inken Köhler