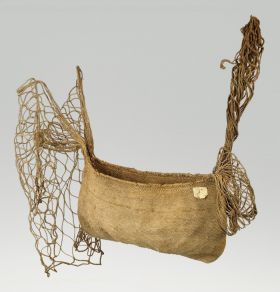 Forster Register A. 19: ‘A bag full of stones [from Mallicolò]’

The basic material of the bag consists of threads about 1 mm thick, twisted from very fine fibres. These threads are knotted together in very tight rows, so that on first glance, they appear to be woven or plaited. The carrier straps tied to the ends of the long sides of the bag are similar to nets knitted in a regular and wider mesh, made of the same threads as the bag itself. The bag could be fastened round a man’s waist with these straps. This enabled the carrier to keep his hands free, while enabling the objects contained in the bag to be easily reached. This makes plausible the exclusive function of the bag as being to transport sling stones, this apparently the only use observed by the participants of the Cook expedition.

There is no doubt that the bag belongs to the Forster Collection, because of the typical ‘F.’ label on one side. In the Register of this collection, the bag has been listed as follows: under the section headed ‘A. Weapons’ is written ‘18) a sling 19) a bag full of stones from Mallicolò’.

It is questionable however, whether or not the regional origin ‘Mallicolò’ (meaning Malekula in the New Hebrides) is correct. As with the description of the sling stones and the sling from New Caledonia, it is best here to refer to Speiser (1923: 232) and Sarasin (1929: 201). Both authors, although referring to each other’s work, and with their respective fieldwork conducted almost a century and a half after Cook’s expedition, confirmed that the occurrence of such bags (as well as of the specially-made sling stones transported in them) is limited to the region of New Caledonia. This is in accordance with Humphrey’s statement in his catalogue concerning specially-made sling stones, which according to him originated in New Caledonia. Furthermore, such sling stones and the bags used exclusively for them are also described in G. Forster’s report (1983: 828f.), solely for New Caledonia. It is therefore quite probable that the given regional origin ‘Mallicollò’ was based on an error, and that it is more accurate to assume New Caledonia as being the bag’s place of origin.

A very similar bag from Cook’s voyage is located in Sydney (Kaeppler 1978a: 244).Volker Harms

Back to New Caledonia
Back to War