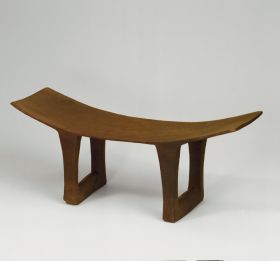 Humphrey No. 207: ‘A wooden stool with a broad top which is hollowed in, & having four legs, each couple united at bottom cross-wise, and is cut out of the solid. ‘Tis used as a pillow by the Natives of the Society Isles and to make it easy for the head they fold up a piece of soft bark Cloth and lay on it.’

The headrest is made of a piece of brown wood. Tamanu (Callophyllum inophyllum) is listed as the kind of wood preferred for headrests (cf. Wilson 1799: 392; Henry 1928: 48 and Bunzendahl 1935: 168). The rectangular supporting surface for the head is clearly concave and has four legs almost square in cross-section. For reinforcement, each pair of legs is linked by a crossbar, of about the same thickness as the legs, at right angles to the supporting surface. The surface of the wood has a fine finish and is smoothly polished.

In contrast to the less widespread and larger stools, iri or nohoraa, regarded as the insignia of rank of the nobility, smaller and lower headrests, tuarua, or turua and tuaurua such as the Göttingen specimen, were part of the usual household (cf. Söderström 1939: 30ff.; Bunzendahl 1935: 168f. and p. 24).

The drawing in Handy (1932: 33) serves to make clearer the distinction between the small headrests and the larger seats or stools. Gundolf Krüger

Wilson, James, A Missionary Voyage to the Southern Pacific Ocean. Performed in the Years 1796, 1797, 1798 in the Ship Duff commanded by Captain James Wilson, London, 1799.

Back to Tahiti & Society Islands
Back to Household