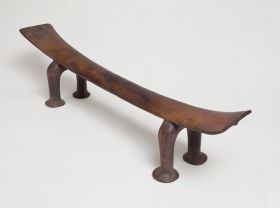 Humphrey No. 208: ‘another [wooden stool] used for the like purpose by the Indians at the Friendly Isles. It differs from the other in not being so broad in proportion to the length, which is greater than the Otaheitean one, the legs project with a Shoulder from the sides, are not united, and have round feet.’ (= Oz 348)

One of three headrests made of wood, consisting of a flat piece supported by two pairs of legs. The pieces are slightly convex and become wider from the middle towards both ends. Each pair of legs is horseshoe-shaped with the curve on top. The ends of each leg are broadened to form a foot.

Headrests from the eighteenth century varied greatly in form. Söderström (1939: 45) gave a description of what he claimed to be the ‘usual Tonga type’ of headrests (or as he called them ‘wooden pillows’): ‘ ... with a narrow, concave ‘seat’ and out-curving legs with slightly broadened, round and flattened feet.’ This type is also depicted by Anderson (in Beaglehole 1967, Illb: 941). Apart from this type of headrest (see Oz 347 and Oz 348), three-legged (see Oz 690) and five-legged kali were also collected on Cook’s voyages (Kaeppler 1978a: 228-30).

Back to Tonga
Back to Household