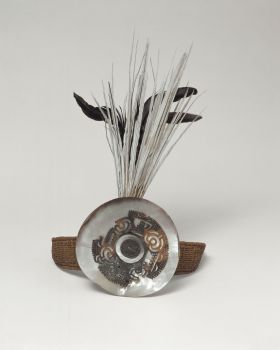 Humphrey No. 50: ‘A Cap of State of a Chief of the Marquesas Isles composed of a Fillet made of Cocoanut Fibres, curiously interwoven, to which is affixed a round plate of Mother o’Pearl, in the front of which is a plate of Tortoiseshell, finely pierced in a variety of singular figures, in the middle whereof is a round piece of Mother o’Pearl, and in the Centre of it a small round piece of Tortoiseshell having small holes neatly pierced through it. In a hole made through the large pearly plate is fixed a bunch of dark green feathers, and behind it a Row of the long tail-feathers of the Tropic bird which are white with a black Item. The whole makes a noble and warlike appearance.’

The shell disc of this uhikana is pierced in seven places; four holes are in the centre. Here, on the one hand, the shell disc has been sewn to the plaited band, while on the other hand, all the other concentrically arranged applications on the mother-of-pearl disc - a round shell disc (Ø 3.5 cm) and, above it, a further tortoise shell disc (Ø 2.5 cm) - have been attached. Vertically above this, there are two additional small holes also used for fastening it to the headband. In a larger hole above, there is a stick with a tuft of white feathers and two curved greenish-black cock feathers. This stick is in turn tied to the plaited headband with a string but with its unattached end adjoins the tortoise shell disc. The openwork tortoiseshell disc is damaged in several places.

Linton (1923: 437-478) distinguished between two types of tortoiseshell disc: one type exhibits elaborate openwork ornaments, and is characterised by a lack of anthropomorphic representations. The other type is more oval and, in the upper centre, ends in two large hook-like forms with the tips pointing outwards. The Göttingen example belongs to the first type and strongly resembles the piece from the Salem Peabody Museum shown in Linton (Linton 1923: PI. 82, C) and the example collected by Sparrman in Stockholm (Söderström 1939: PI. 1, 2). For the second type (cf. Handy 1923: Fig. 23a), the Göttingen Collection has an example of the same kind (Oz 110) but not as part of the Cook/Forster Collection. Linton also shows a uhikana from the back (1923: PI. 81, C). This, however, differs fundamentally not only from the object described and depicted above, but also from the Göttingen uhikana because it is clear that two sticks (with remnants of feathers?), between the mother-of-pearl disc and the plaited headband, are attached to the wickerwork. ‘Some had a kind of diadem around their head consisting of a flat band made from plaited coconut fibres. On the outside of this headband, two round, quite large pieces of mother-of-pearl could be seen whose centre part was inlaid with a disc made of openwork tortoiseshell. Behind these shield-like ornaments, two tufts of black, shining cock feathers rose high which indeed lent a beautiful, noble look to this head ornament’ (Forster 1989; II:19, 32, PI.1, No.1). Brigitta Hauser-Schaüblin